Castlevania: Bloodstained: Curse of the Moon is the latest result in the ongoing trend of old timey developers trying to prove to the industry that they “still got it.” Through Kickstarter, some members of the original team behind Castlevania: Symphony of the Night (and subsequent GBA and PS2 entries in the series) got the band back together to develop the upcoming spiritual successor to their Castlevania work Bloodstained: Ritual of the Night. In this case, Curse was actually listed as a stretch goal for that project and developed by Inti Creates (Mega Man 9, Mega Man 10, a bunch of other games that aren’t as good as those two). And since I personally haven’t loved anything in the series since Super Castlevania IV for the SNES, this NES trilogy inspired side-project made the day it was released pure Hell on Earth waiting for that clock to strike 5 at work. But once I was finally home and it finished downloading and that title screen came up and the music kicked in and well…I knew…I just knew this was going to be something reeeaaal special. 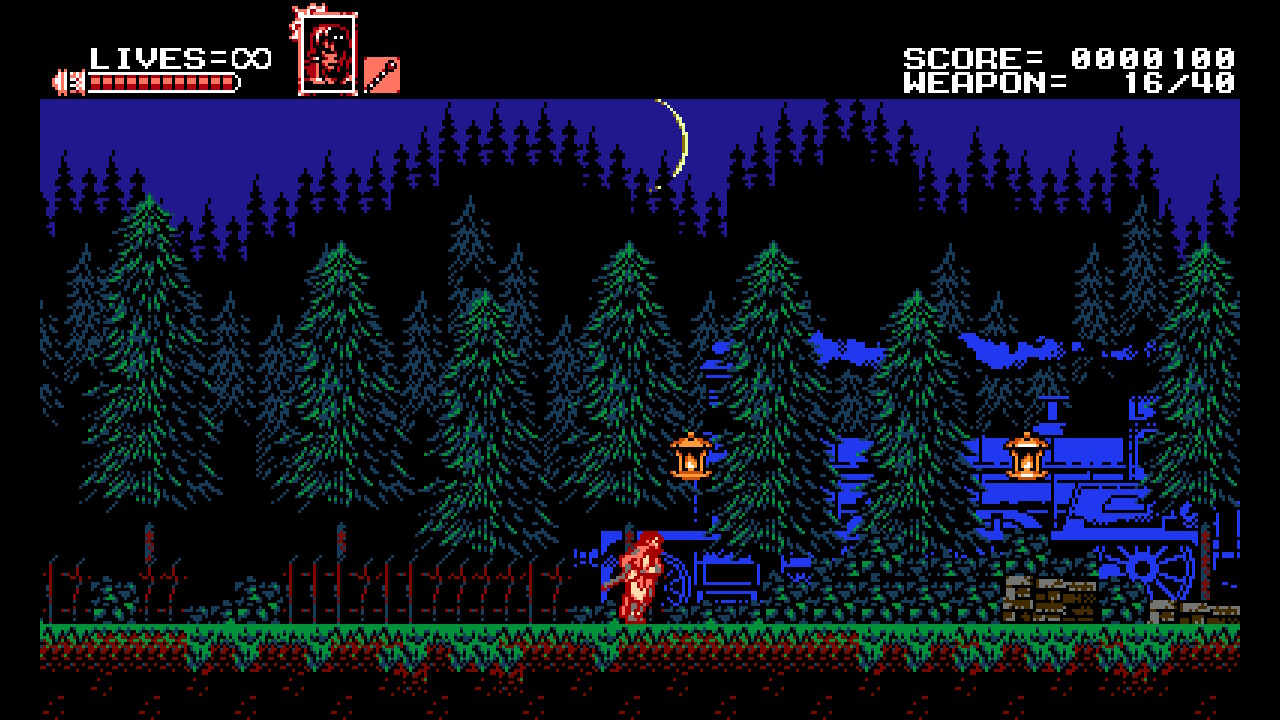 Right off the bat, the atmosphere makes it perfectly clear that you are indeed playing a damn Castlevania here my friend. The characters all have different names and Dracula is nowhere to be seen, but it is undeniable. From the outset you take control of Zangetsu, a somewhat…familiar looking character on an epic quest to kill the last boss of the game. But Zangetsu is Simon Belmont in sprite only as his signature weapon is a sword and not the legendary vampire killer. Got that? HUGE difference ok. However one of his sub-weapons is a long chain that grants a pretty neat vertical attack, so…y’know.

The first stage nicely sets the tone for the entire experience, as a massive steam locomotive barrels through the midnight woods behind you and man, that thing looks cool. It’s the first of many thrilling graphical flourishes you’ll come across and believe me, they go a long way toward making you grin like an idiot. 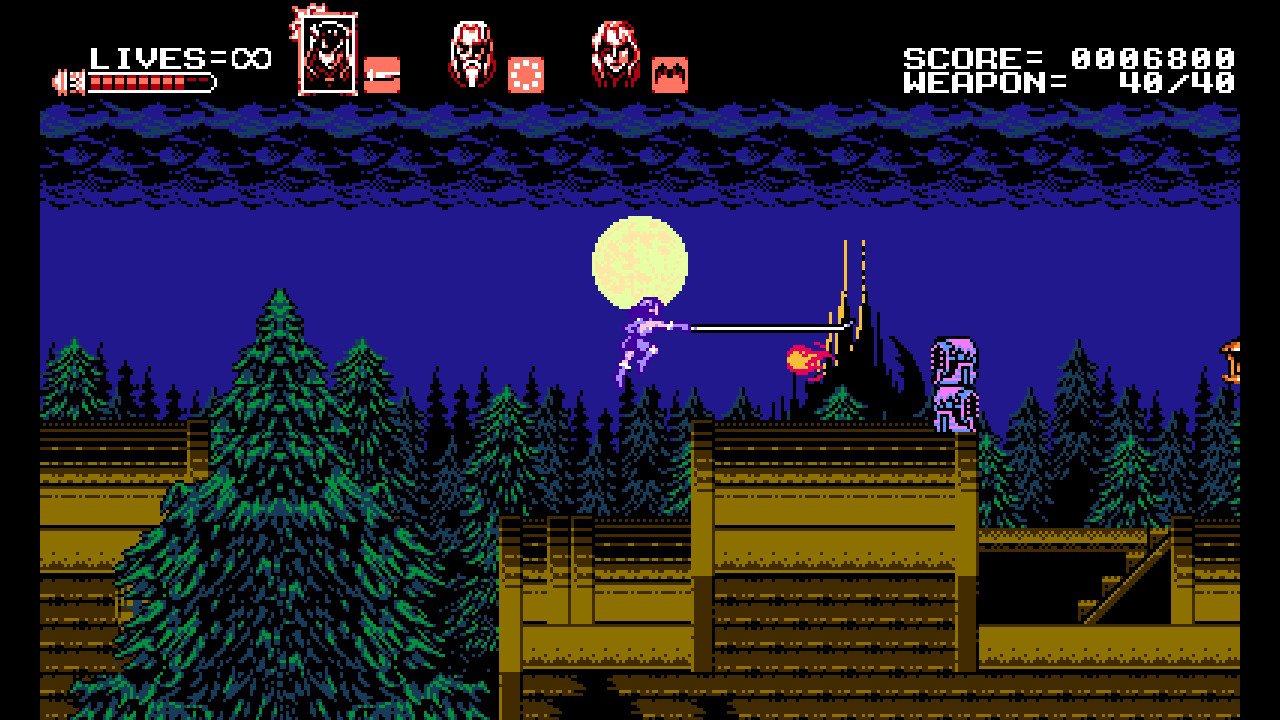 Much like Castlevania III, Curse of the Moon has you coming across and adding 3 assistant characters to your roster, each with their own unique set of abilities and secondary attacks. The first of these that you cross paths with is Miriam (set to be the main protagonist of Ritual of the Night). And while Zangetsu puts in an effort to avoid any kind of legal trouble, Miriam has no problem using a whip as her primary weapon. She also has a very cool slide attack that comes in handy as there are areas that can only be reached by using that technique and she’s the only character who can do it. She’ll also obtain a really neat boomerang sickle thing that is incredibly satisfying to use. In fact, just about all of the attacks in this game feel great.

The next character you add to your party is an alchemist named Alfred who counts playing the crap out of Ninja Gaiden 2: The Dark Sword of Chaos amongst his favorite pastimes. His main attack is smacking enemies upside the head with a stick but you can also obtain the helpful ring of fire as seen above, and the ability to double himself Ryu Hayabusa style. He starts with the lowest health bar of the group but naturally, there are life and weapon meter extensions scattered throughout. Which reminds me: The hearts that you collect in this game restore your health and not your sub-weapon! Unlike some backwards thinking original series. That is something that has really bothered me for years you guys so thanks for finally fixing that. 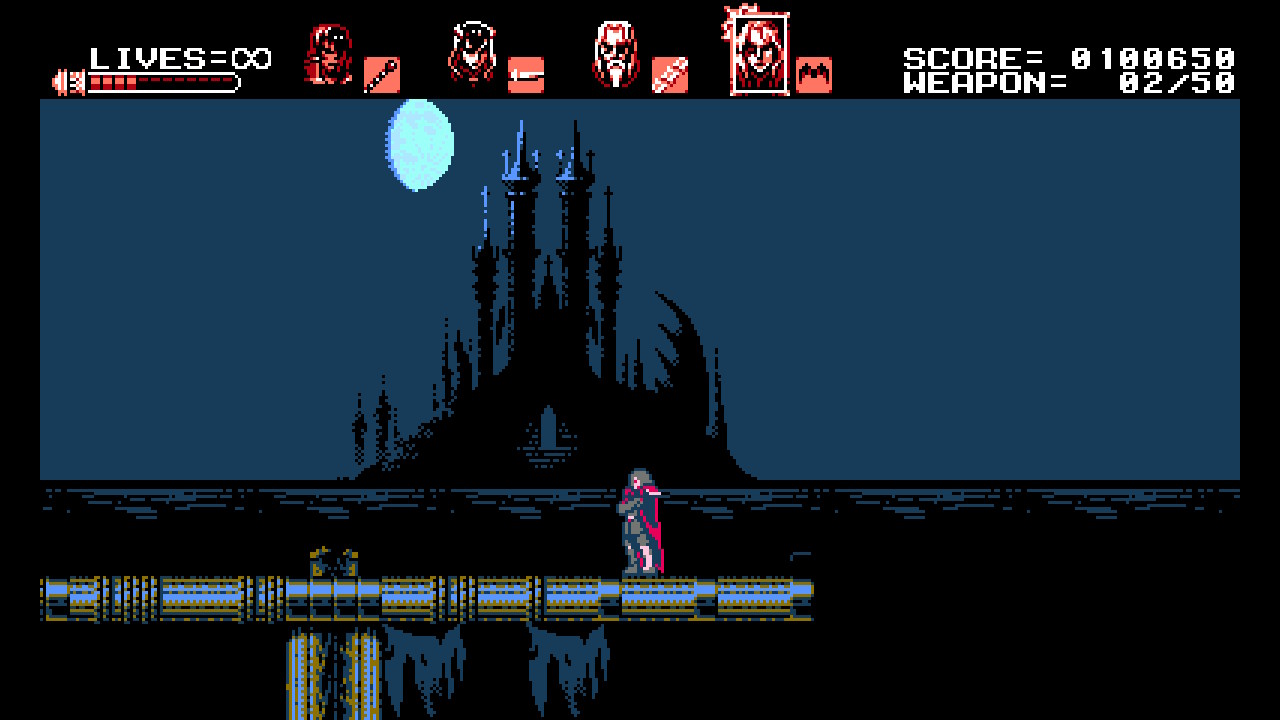 Your fourth and final playable character is arguably the coolest because he wears a cape and can turn into a bat. Gebel is clearly a nod to Alucard and is the most likely to wind up as somebody’s tattoo. Like Maria’s sliding power, his bat transformation also makes him the only one who can reach certain platforms, allowing him to fly to other areas of the stage that lead to branched off paths. It’s pretty great! In fact, the character swapping mechanic overall is one of my favorite aspects of the game. It’s such a smart and seamless shortcut to hop between all of these abilities at the press of a shoulder button. Incredibly satisfying. 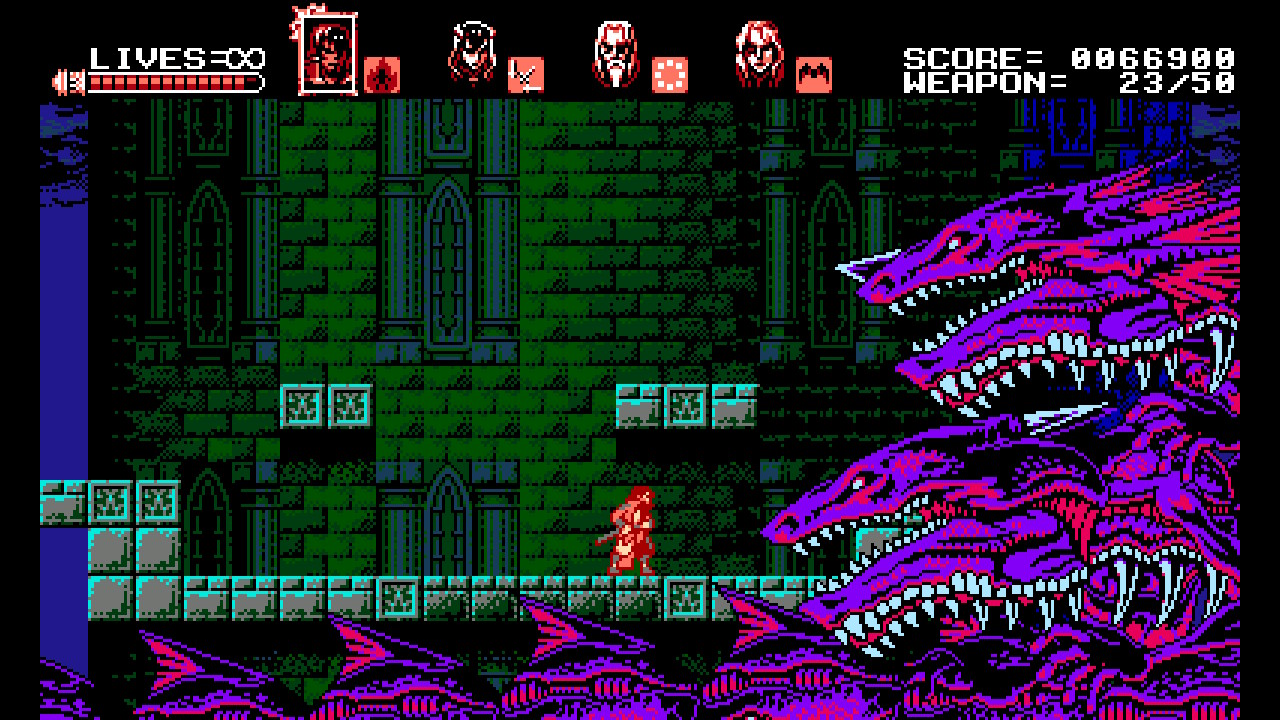 Story wise, from what I understand the game features a pretty cool one but I didn’t really pick up on any of that. At least not until I got to the end and was trying to figure out what the Hell was going on. There is a very cool twist with the final boss that is a nice idea and adds an odd melancholic touch to the whole thing too. Pretty tastefully done! 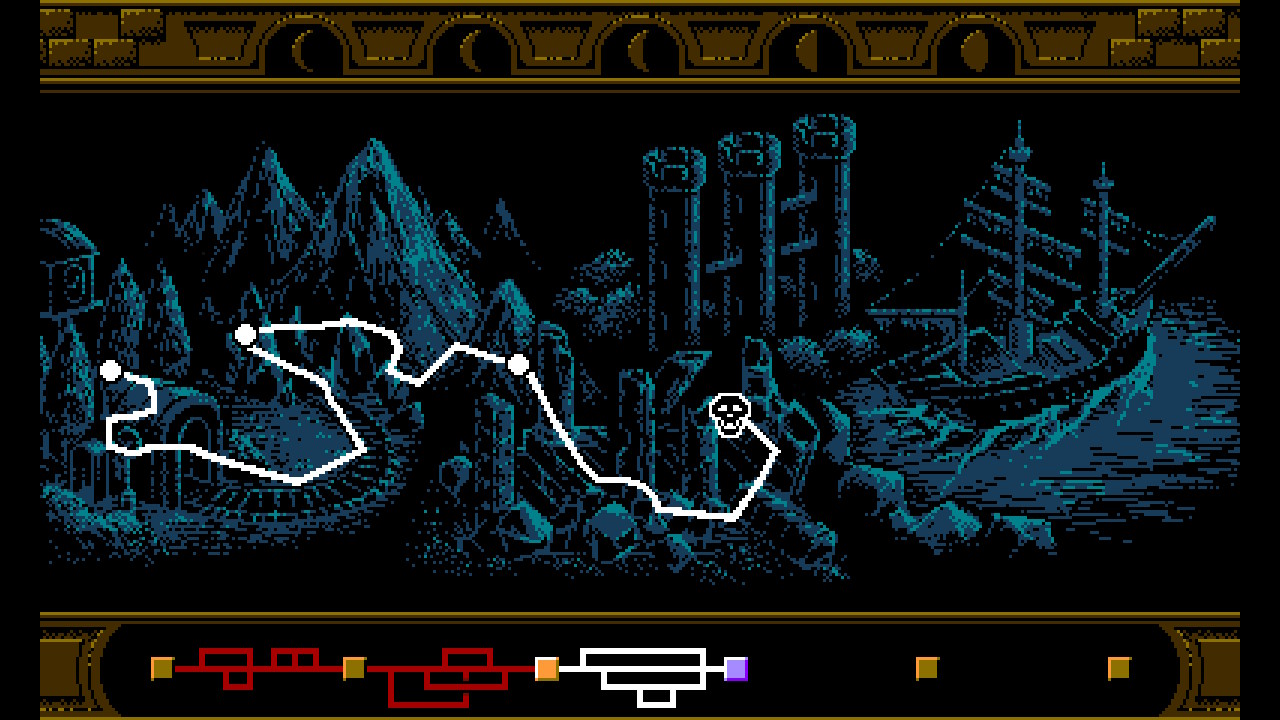 As for the amount of game you’re getting I’ve read some complaints that it’s too short and I get it, nobody wants a good thing to end too soon. But Curse of the Moon falls somewhere in between the length of the original Castlevania and part III which to me is plenty. Throw in the fact that there’s a *spoilers* second quest with a neat bonus stage and the fact that it fully encourages speed runs, not to mention customizable difficulty settings and that makes the replayability factor here pretty strong! I’ve played it all the way through several times now and keep popping it on in short bursts here and there simply because it’s so fun.

The soundtrack is good too. Maybe even *very* good but just shy of great, though there are some outstanding moments that will burrow themselves into your head for sure. Stage 2 (**Frigid Hell**) is a particular standout that sounds ripped straight from a Konami game pak. This soundtrack also made me wonder something about those old 2D sidescrollers that never occurred to me. Were they composed with the player’s pace in mind? Because some of these tracks can flow so perfectly in sync with your stage progression that it was hard to not notice the synergy that was happening with every aspect of *Curse of the Moon*. There were definitely a few “put the controller down and just savor this” instances and I haven’t had that feeling in a very long time. 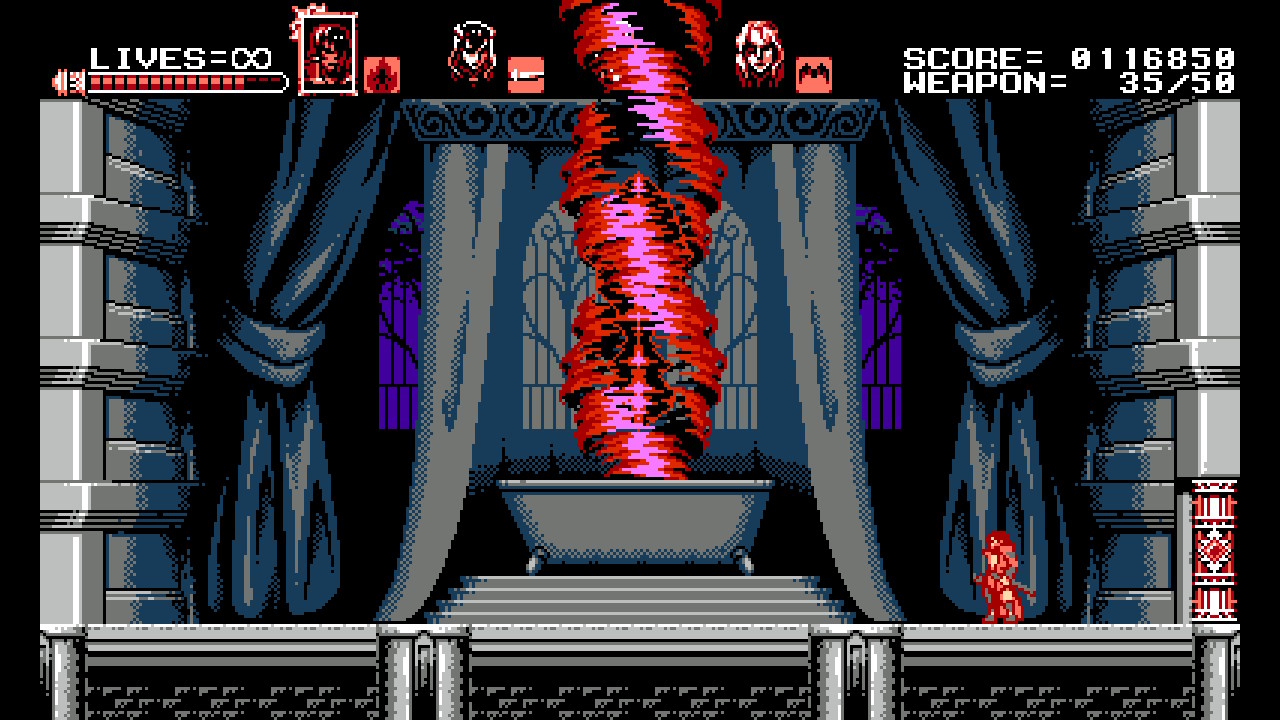 On that topic, I don’t think I’m alone in feeling like the indie scene is a bit oversaturated with “8-bit” retro NES styled games. But much like the glorious Shovel Knight, the team behind this achievement doesn’t just nail the presentation, they really capture something. Bloodstained sincerely plays like an actual relic of the 80’s that you somehow missed or was never released and now here it is. I believe the word I’m looking for here is authenticity. Everything looks, sounds and feels the way you remember Castlevania and so many other titles from that pixelated heyday. It perfectly conjures up the tone of those 5th grade late Friday nights lying on the floor lit only by glow of the television, but now on an HD widescreen canvas.

They really did it.

So there it is people. This game comes at the highest level of dork recommendations. And at ten bucks and a blink and you’ll miss it file size, it’s a good thing Nintendo doesn’t let you “gift” digital games anymore because I’d wind up in big trouble buying it for every Switch owner I know. But as always, this is only one person’s opinion and there is still a higher power just waiting to chime in.

Mr. Face, your track record for being correct speaks for itself. What did you think of Curse of the Moon?