Donkey Kong 64 came out in the fall of 1999 and was bundled with the new Nintendo 64 Expansion Pak, which was required in order for the game to run. At the time I balked at using money I had earned, by the hard labor of being born on a day and having grandparents, to pay the premium (at the time) price of $59.99 the bundle commanded. Somehow this same logic didn’t apply to the similar accessory-game bundle of Pokémon Stadium, but long story short I did not end up getting an Expansion Pak, or any of the three games that required it, back when the N64 was current. Recently, that changed.

First things first: I managed to get one hundred and one percent, the game’s maximum completion rate, without looking up anything. It’s possible I skimmed a Nintendo Power article on it back in the day, but unlike with certain other game guide articles I’m 99.99% positive all of that information long ago leaked out of my brain. I say this now because in light of the game’s reputation over the years it seems somewhat significant or likely to get a reaction out of some people reading this. [People read this? -Ed.]

Perhaps that’s jumping ahead of things. For those unaware of Donkey Kong 64 the setup is as simple as it was in the Donkey Kong Country series: King K. Rool is back making life miserable for Donkey Kong, imprisoning his four friends and stealing his golden banana hoard. The goal is to traverse the various areas of DK Isle (and K. Rool’s sailing vessel, nearly as large, which has collided with the island), defeat K. Rools minions, rescue (and subsequently and immediately play as) DK’s friends, and collect the golden bananas, all leading up to a final confrontation where the Kongs beat the piss out of K. Rool himself. Along the way they are supported with new moves purchased from Cranky, Funky, and Candy Kong using coins collected from about the levels.

Donkey Kong 64 was the second 3D platformer in the vein of Nintendo’s Super Mario 64 to come from Donkey Kong Country development house Rare, Ltd. Their first Mario 64-alike was Banjo-Kazooie, a game many people believed improved on the framework that Mario 64 had more or less invented. Between these and many other quality games coming out of the studio, and the opportunity to see and control Donkey Kong in a 3D world, great things were expected from this game. The most ambitious tweak to the formula and the thing that sets DK64 apart is unquestionably the mechanic of switching between and playing as five different characters, each with their own moves and specialties that are required to complete the different challenges and finish the game. It wasn’t the first game to offer this, of course – Super Mario Bros. 2 garnered much of its popularity from the same idea – but it was one of the first games of its type to do so. And in the 3D platforming genre, with its wide-open levels designed for exploration, the prospect of using five different characters was something of a thesis statement declaring what Donkey Kong 64 was and why people should be excited to play it. In a word it was this: Bigger.

Of course, bigger doesn’t always correlate with better, and this is where the game’s overall reputation among those who’ve played it comes from. There’s a LOT to do and collect in Donkey Kong 64, to the point where most of it is hardly significant and becomes a chore. The five different characters have their own abilities, sure, but in reality they share a large pool of basic moves. There are a few situations of some inventiveness where their specific abilities are required, but most of the time these abilities are reduced to a game of using a certain Kong-shaped key to open a Kong-shaped lock. Quite often there are sections of levels that where clearly marked buttons or switches are clustered together, one for each Kong to activate, and each provides access to a small area or a minigame, several of which are repeated at higher difficulties throughout the course of the game. In effect this leads to sessions of methodically switching from one character to the next, in order, mining a vein of golden bananas until it’s depleted, then moving on to do the same thing elsewhere.

Perhaps the most infamous bit of repetition, however, is the conceit of colored bananas. Scattered throughout each level are individual small bananas, bunches of them, and floating balloons that award bananas when shot, all color-coded to be picked up by a certain Kong and ONLY that Kong, one hundred for each member of the DK crew in each stage. It is some condolence that not every banana need be collected to progress, though the number required increases in each stage. The number itself isn’t really the problem, though. The problem is the frequently-encountered absurdity of a bunch of bananas that the player cannot collect, despite touching them, because they are the wrong Kong. This leads to a lot of backtracking.

There is a gap in the logic here that leads to everything feeling rather arbitrary, and once encountered in one aspect it’s easily noticed in others. By the time the game is over, for instance, the player will have collected way more coins (also color-coded) than strictly needed to obtain all moves in the game. It’s a redundancy to account for two facts: one, that the player may miss a good number of coins due to the size of the game and it’s annoying to have to go over large levels with a fine-toothed comb; two, that certain moves or upgrades may be purchased for the whole team by any Kong, meaning one Kong could conceivably deplete their coin supply and left unable to buy their own unique moves. But then why must certain analogous moves be purchased individually by the Kongs? “Who cares, just flood the game with enough coins and we won’t have to worry about it.” It just reeks of something that could have been fine-tuned or fixed with more clever design. All of this collecting and repetition is compounded by the large size of the worlds and in many cases their relative emptiness, with minimal meaningful enemy encounters. 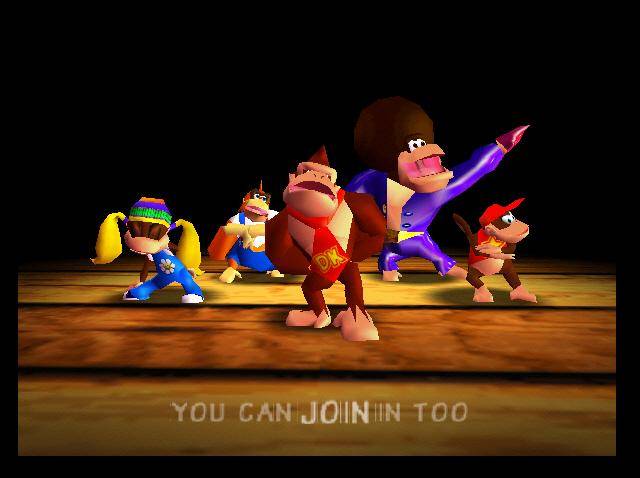 There are other examples of repetition or half-baked ideas, like a couple of boss encounters that are tweaked for rematches, and a few more collectibles, but to harp on them further would make me guilty of the same crime of repetition. Furthermore, I’d prefer to move on to some of the things the game actually does well. In between everything that feels like a chore there is still fun to be had – the little setpieces and events such as races, or flying around as Diddy, for example. The basics of the gameplay and running around as the Kongs are solid. Graphics are nice overall, with some wonderful dynamic lighting in certain sections and a higher resolution than most N64 games due to using the doubled RAM provided by the Expansion Pak. The music is good, in line with composer Grant Kirkhope’s other work on Banjo-Kazooie, if perhaps slightly less memorable. One of my favorite things is the detail involved in the character select screen, with each of the 5 Kongs having two animation cycles and accompanying voices, one for when they are highlighted by the player and one for when they aren’t. Typically each Kong is happy at the prospect of being chosen to play, with the exception of Chunky, who looks worried and points over and says “Tiny!” Chunky in particular gets at least one more animation that really serves to characterize him as a gentle giant, namely his dainty paddle when swimming. Small, thoughtful details such as this help elevate games and make them memorable.

Finally, the shining element of the game is without a doubt it’s inclusion of the original Donkey Kong arcade game, with all four levels and AI intact, and a port of Rare’s first published game, Jetpac. Both are unlocked through normal gameplay several hours into the main game, both are pretty damn fun, and both are otherwise fairly difficult to legally obtain. In the years since DK64‘s release, Jetpac has seen a re-release and a modern sequel on Xbox Live Arcade due to Rare’s purchase by Microsoft, and Nintendo has released a special limited edition promotional ROM of the NES version of Donkey Kong with the previously omitted cement factory level added in. The Donkey Kong 64 cartridge arguably remains the most practical way of obtaining home versions of both, and in that sense is a nearly indispensable artifact for fans of Nintendo and Rare’s histories.

Overall, my experience with Donkey Kong 64 was almost constantly clouded by the notion that I could be playing Banjo-Kazooie instead. The games are very similar, except in Banjo-Kazooie all possible moves, once obtained, are available to the player without having to shuffle back to some designated area to change characters. It’s like each of the Kongs is a horcrux into which Banjo and Kazooie put pieces of their souls, leaving them less than the sum of their parts. Donkey Kong 64 was followed up with Banjo-Tooie, a game that also featured large worlds and many of the things introduced in DK64 but toned down on some of its excesses. Also, the Banjo-Kazooie games are funnier, possibly because Rare could largely do what they wanted in them and sneak in a few off-colour gags, as was their nature. In the end, Donkey Kong 64 is not a bad game, but the density of fun to drudgery leaves something to be desired. Oh well, Jetpac is pretty fun.

Shit, all that and I didn’t even mention the DK Rap. It’s goofy as h*ck but that’s intended. There.