Thanks to the incredible and unexpected generosity of a dear reader and friend, I’ve finally been dragged kicking and screaming into the current video game era, more or less, and now have a Nintendo 3DS system at my disposal. I suppose it’s time to do some reviews, then! You guys enjoy those, right? Hello? Norman, is that you?

Aside from some of Nintendo’s own offerings for its current handheld, what I’ve hitherto been looking upon from afar with most lustful stares has been the series of 3D revamps that Sega has unleashed for download on the eShop. A suite of seven classic (and Altered Beast) Sega arcade and Genesis games rebuilt with tender loving care, as detailed in a series of lengthy and enlightening interviews, the Sega 3D Classics series continues what Nintendo started a while ago with their own stereoscopic 3D rebuilds of classic NES games, including Excitebike, Kirby’s Adventure, and everyone’s favorite game in the Urban Champion series, Urban Champion. Sega have released and revealed three more titles in Japan, including OutRun just recently, but of the original eight that have thus far made it to the US eShop I was most intrigued by the three arcade games. All featured pseudo-3D gameplay based on scaling sprites for graphics and looked absolutely stunning in their day, and the perspective seemingly made them a natural fit for 3D retrofitting (unlike, say, Urban Champion). Above them all, the one I found most interesting was Galaxy Force II, and I decided to make that my first purchase on my new system*.

*Galaxy Force II* received an infamous Genesis port back in the day that had no chance of replicating the cutting-edge arcade game, a not uncommon story from the early ’90s. I’d never heard of it until fairly recently, and if you hadn’t either it can basically be described as Space *After Burner II*, where the II in both cases indicates more of a re-release with new content instead of a whole new game (think *Ultimate Marvel vs. Capcom 3*, or really most Capcom fighters.) After choosing one of the five planets to start on, your ship is launched into action shooting down enemies and dodging obstacles in a manner not too far off from *Star Fox*. You have a standard machine gun which you might as well engage at all times, infinite lock-on missiles (four at a time) that are your actual primary weapon, and the ability to speed up or slow down. A ship appears early on in each level and drops a payload of 60 missiles that let you lock on to six enemies at a time instead of just four, but other than that it’s blasting in fairly open areas followed by a walled-in base on each planet, and reaching and blowing up the bases’ cores. No bosses, no real strategies other than memorization and dodging and trying to shoot as much as you can. The game is on a timer of sorts represented by your ship’s energy, which serves as both fuel and health, meaning it ticks down constantly as the ship flies and drops a chunk with every collision and enemy volley that hits its mark, especially after a certain number of hits breaks your shield. You replenish energy by blasting everything in sight, which ups a Bonus Energy counter that is added to your remaining energy at checkpoints in certain stages and at the end of each stage. There’s no opportunity to continue when your main energy hits zero. Arcades! None of that really describes the experience of actually playing the game, however. Despite being a bit shallow, and a bit brutal for anyone who hasn’t memorized and optimized a route through each stage, the ride is a wonderful one. The once-cutting-edge graphics may not be such a technical marvel today, but they remain exceptionally well-done, bright and colorful and having a distinct look to them like all of Sega’s sprite scaling arcade games. Each planet has its own look and enemies, with the fire planet being one of the most memorable as you fly above rocks and fire and flame dragons spiral up from the surface and swirl around you. The speed of the game can get a bit frantic but never really disorienting, save the rare crash into the scenery in a particularly odd way, and its complemented by an upbeat soundtrack and crunchy Sega arcade sound effects. The game itself is solid, if shallow and somewhat short, but *Galaxy Force II* really focuses on the experience elements, to the point that the “ride” I mentioned was an **actual** ride when the game was released: Two versions of the arcade cabinet were sit-down experiences whose chief attraction was rotating and tilting to match the on-screen action. This cabinet, in fact, serves as the splash screen for the game on the 3DS Home menu. 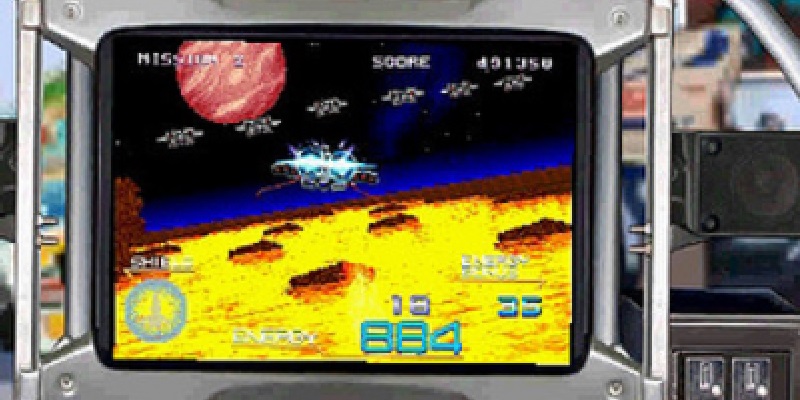 Which brings me to the additions for the 3D Classics version of the game. Obviously, first of all, the game is now in 3D for the first time, and it adds a lot to the experience. Having just acquired a system of my own, I’m still in that honeymoon period where full motion stereoscopic 3D without the aid of glasses or looking into a tube is making me giddy, but I think it’s safe to say that Galaxy Force II is a stellar example of what it can bring to an experience. The core of the game itself has not been tampered with, but the presentation enhances it in a very natural-feeling way, and actually makes it slightly easier to judge how close obstacles and enemy fire are.

Beyond that, developer M2 have added a smattering of options, most brought along from the port of the game they did for the Playstation 2 in Japan as part of the Sega Ages line. There are toggles to increase your starting energy and set the difficulty level of the game to give yourself a fighting chance at finishing it, saving and loading a game in progress, storing or watching a replay of one of your playthroughs, control settings that include options for the Circle Pad Pro, music and sound effects settings, and a sound test. However, in a true testament to how much care has gone into a six dollar port of an old arcade game, the display options take the cake. There are four screen size settings, the first three of which are bordered original resolution, an expanded view in the same dot ratio that removes the border and extends the viewable game area to fill the 3DS’ top screen, and a stretched version of the original view. The fourth option scales the original viewpoint down to displays more border/background.

This may sound like a waste at first, but there is a reason. Aside from “OFF” there are two border options, and they display the monitor area from the two styles of motion cabinet that *Galaxy Force II* was released in in arcades. There are also options for backgrounds to this, either a space background or a somewhat blurry but recognizable arcade scene. These options are all in service to one silly, but brilliant and effective, other option: re-creating the motion cabinet. On either of the options with a border, with motion HUD set to ON, the game will simulate the view one would see while playing the game in either of the deluxe cabinets, with the game screen embedded in the cabinet border, tilting both and scrolling the background view behind them. It’s pure unapologetic fluff, and it cannot truly replicate the real experience… but it comes perhaps *shockingly close*. Oh, and to backtrack a little and top it off, there’s a sound option for Environmental Effects, which lets you toggle and adjust the volume of the sounds of the arcade cabinet itself moving around.

The very fact that such a minor but unquestionably well done and well thought out element was deemed a worthy addition to the project says a lot about this release. If porting and emulation of the core game had been poor it might be seen as a shameless gimmick that adds nothing. (For examples of this in play look to certain games included on Sega Classics Collection for PS2.) As part of an already excellently done package from a developer with a proven track record of tackling the classics, however, it’s a goofy element that exemplifies a spirit of fun. In other words, 3D Galaxy Force II may well be the embodiment of the entire Nintendo 3DS experience. 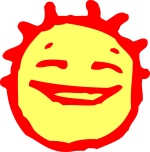 3D Galaxy Force II is available for $5.99 on the Nintendo 3DS eShop, a reasonable price for a fun experience that won’t captivate for hours, but will for minutes at a time again and again.

*Well, first I bought since owning the system.