I guess the Wii U is a real thing now. Super Mario 3D World is finally here and wouldn’t you know, is an absolute masterpiece of the platforming genre. Expanding on and pretty much perfecting the tightly imagined foundation laid down in the 3DS’ somewhat underrated 3D Land, Nintendo’s new Mario game is a delicious cocktail of fresh ideas, compelling mechanics and juuust the right amount of fan service for us old people. Not to mention the fact that we can finally indulge in the pleasure of watching Mario run around in an HD 3D world for the first time ever. Fair warning: This review is going to be a massively positive one so if you’re more interested in reading miserable complaints, I suggest checking out impressions of the PS4 and Xbox One’s launch software elsewhere.

Take a shot everytime “3D” pops up in this article. 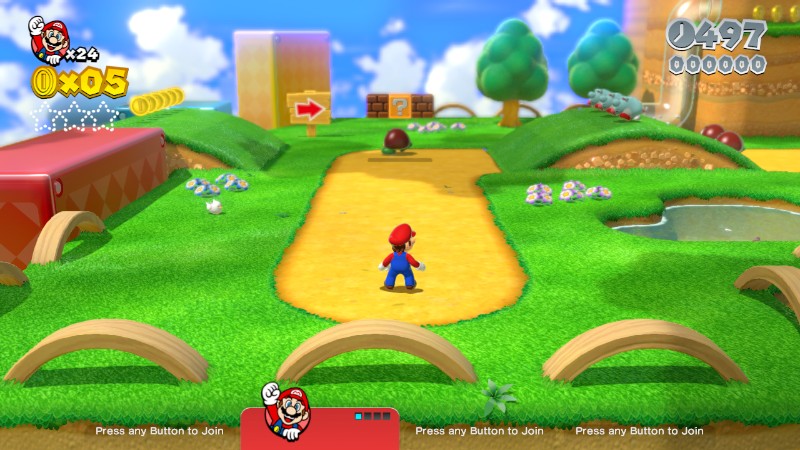 Any fan of Super Mario should be more than familiar with the drill by now. This game is a collection of various themed worlds (ice, desert, fire, etc.) all populated with ingeniously designed platforming stages. With the assistance of various power-ups, our favorite plumber’n pals must traverse these locations all in an effort to seek out and defeat the evil King Bowser from whatever crackpot scheme he’s cooked up this week. That’s right, I said “pals” because much like Super Mario Bros. 2 for the NES, both Peach and Toad are now selectable in addition to the Mario Bros. And just like that 8-bit classic, each of them have their own unique levels of weight and abilities. Toad can run faster and is a bit stronger, the Princess brings her awesome hover jump and Luigi has a higher leap with Mario being the all around standard guy. And with four friends in the same room, you can all play simultaneously. 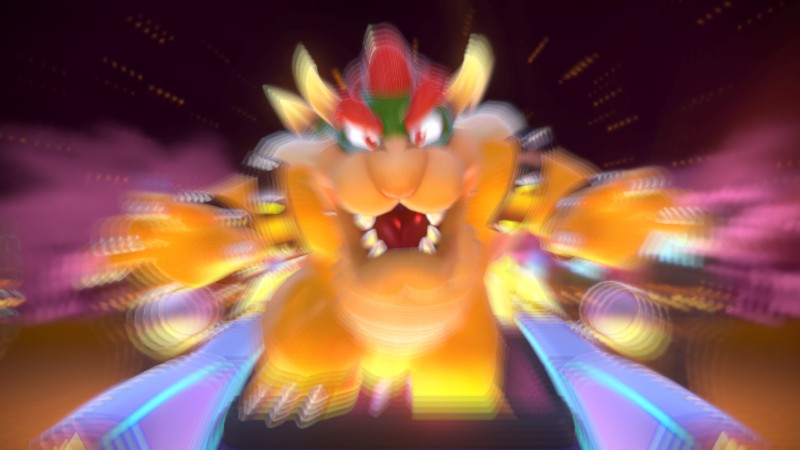 This time the (I hesitate to use the word) “story” centers around a bunch of fairies that Bowser has caught and bottled up. Obviously they couldn’t rehash Peach being kidnapped since she’s now a playable character so this is really just a matter of function. I mean, Mario has to rescue somebody right? Nothing new in that department, which is fine since no one plays these games for their literary value. At least I certainly hope not. 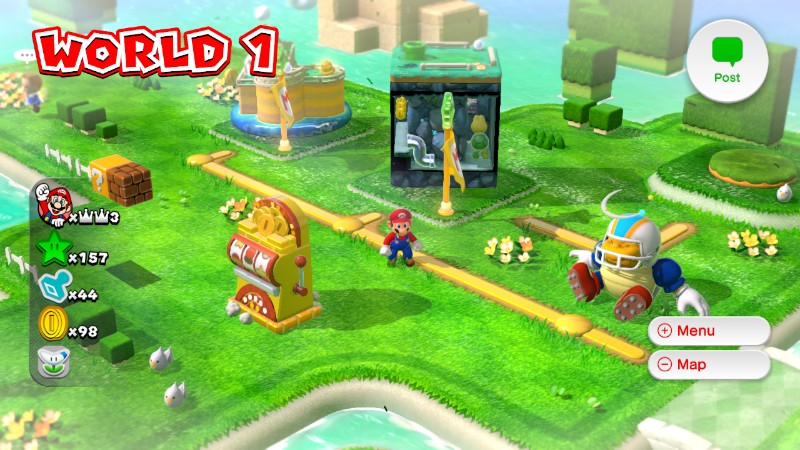 So what’s new? Well some tweaks here and there and plenty of powerups but the word of the day with this game is refinement. The overworld still looks like an overworld but now you’re free to walk about and explore the different stages at your leisure. You still have to unlock them to progress mind you but you’re no longer restricted to any set path. To be honest, this isn’t even close to any kind of revelation but the atmosphere it creates is one of simplicity and freedom. That is a good thing. 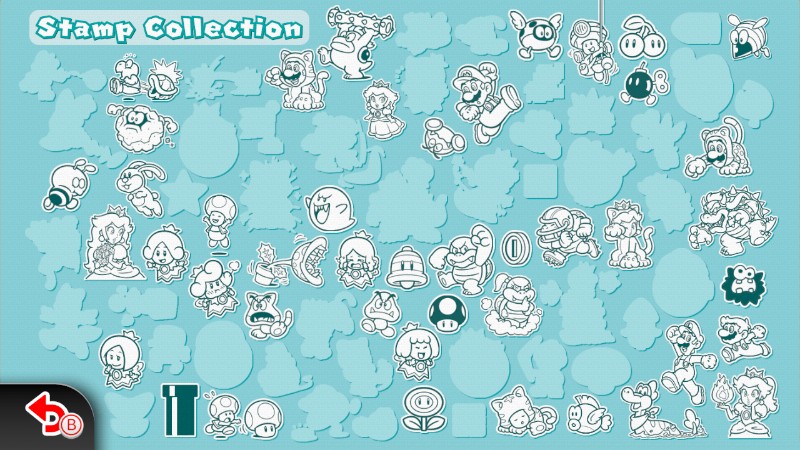 In addition to your typical “challenge” stars, most stages also feature a hidden stamp that can be used on the Miiverse message boards. And let me tell you, this is possibly the most addictive aspect of the entire game. There’s something undeniably satisfying about filling up this sticker book and I love that the art style for all of the characters wouldn’t feel out of place on an 80’s lunchbox. These stamps are all hidden in exceptionally devious parts of their respective stages as well, making it all the more rewarding once scooping them up. If I had to complain about anything here, I guess it would be that they’re not full color. And I guess I will do that: It sucks that these stamps aren’t full color. 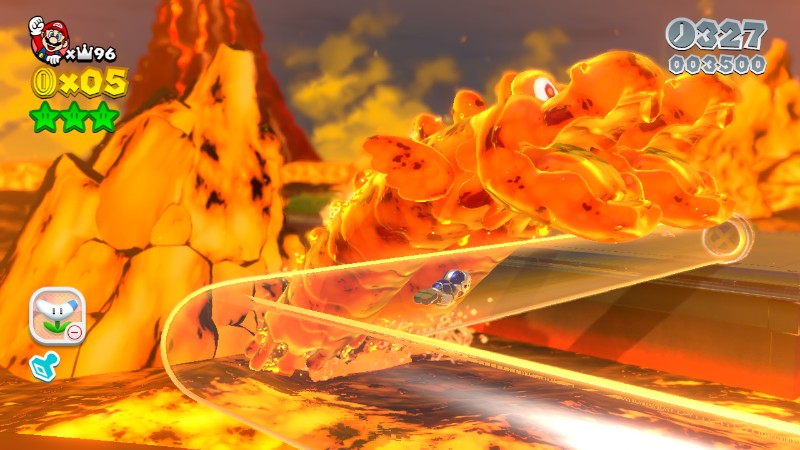 Sadly, this stage is not titled “Tubular.”

How about those controls? Well, this is Nintendo so they’re tight as can be but just as it was in 3D Land, Mario’s move set has been streamlined and simplified with several moves excluded as a result. Most noticeably the triple jump which is too bad as I still catch myself trying to pull it off just out of muscle memory. Really though, you won’t find yourself missing much here as the inclusion of the three new characters adds plenty of variety. Top that off with all kinds of power ups and there’s plenty of combos to experiment with. Speaking of power-ups, this game has a lot. I mean a lot a lot. The cat suit is the most obvious new addition and its one that I’m still on the fence about. On one hand its pretty adorable but on the other more than a little tricky to get used to. I like it fine enough but given the choice, I lean more toward old standbys like the fire flower, giant mushroom and tanooki suit (which is curiously unable to turn to stone for some reason). There are plenty of other surprise outfits to discover of course, but I’m not gonna spoil any of them here. 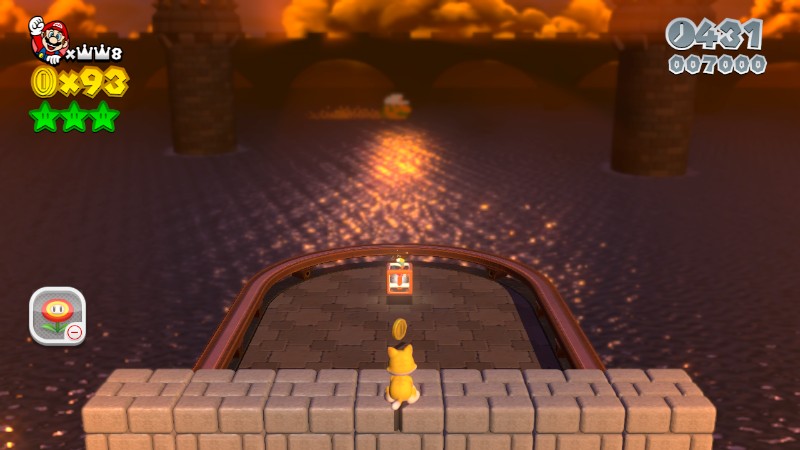 Presentation wise, everything is expectedly top notch. The soundtrack is catchy and upbeat featuring classic themes as well as a few new ones. It’s a great mixture of Galaxy‘s symphonic score and the more traditional Midi created approach and it all gels wonderfully. As far as the graphics, well there’s no problem there either because 3D World is one serious looker. Remember, even though this isn’t a Galaxy game it’s still made by the same team responsible for that series and these people clearly know how to handle some visuals. Gorgeous reflective surfaces and texture work are complimented with a beautifully bright and vivid color palette. All in amazing high definition. Its been a long time since I’ve felt compelled to put the controller down and stop playing just so I could sit back and stare at the screen. But that happened quite a bit during my playthrough and the gamepad’s battery constantly draining had nothing to do with it. 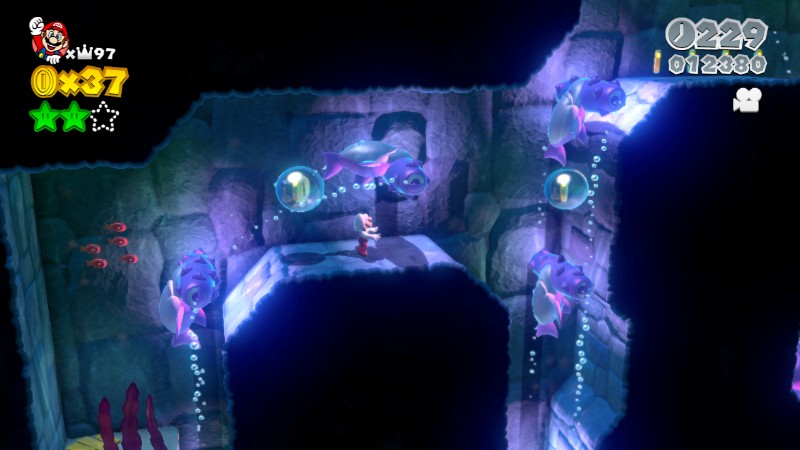 Look at that. Just imagine thumbing through an issue of GamePro back in the day and seeing this screenshot. I would have torn it out and tacked it to my bedroom ceiling. 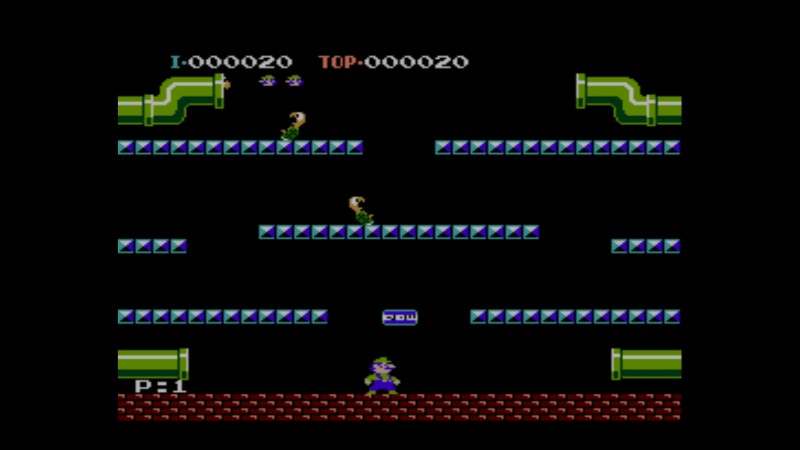 There’s also a special Luigi-centric edition of the original Mario Bros. arcade game featured as a nifty unlockable extra. Or if you happen to have a New Super Luigi save file already floating around in your Wii U, this is actually playable right out of the gate. I had a few minutes with it and it’s precisely what it looks like. Something you’ll think is a nifty unlockable extra that you’ll have a few minutes with. A nice touch if nothing else. 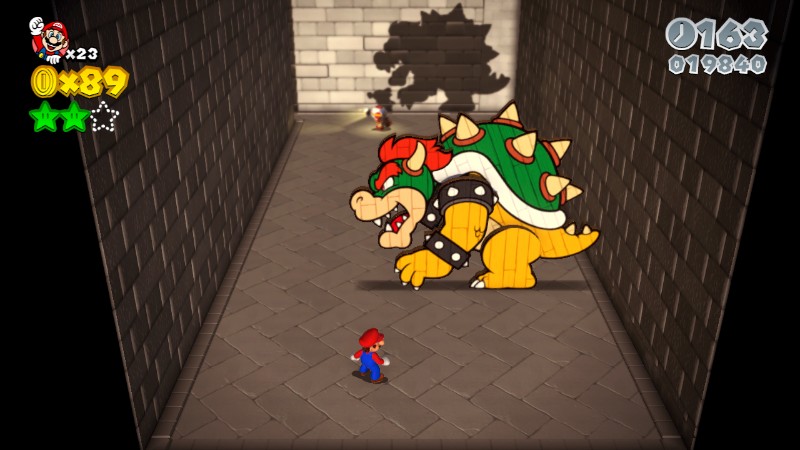 In the end, I can imagine some complaints that this isn’t a leap forward for the series the same way the 2 Galaxy games were on Wii and that’s true to an extent. But it’s fairly clear that it was never intended to be. In the “Iwata Asks” developer roundtable, there’s plenty of evidence to support that another Galaxy is on the horizon and that this “3D” branding is its own thing. A special offshoot franchise intended to create an accessible bridge for players that love the sidescrolling installments but perhaps feel a bit intimidated by the free-roaming style that the series evolved into. Which it absolutely is. It’s also one of the very best games Nintendo has ever made.

P.S. If you’re wondering why I didn’t go into detail about the multiplayer aspect, that’s simple: I don’t have any friends. Well, except for old Mr. Face of course. Hmmm, I wonder how he liked Super Mario 3D World. 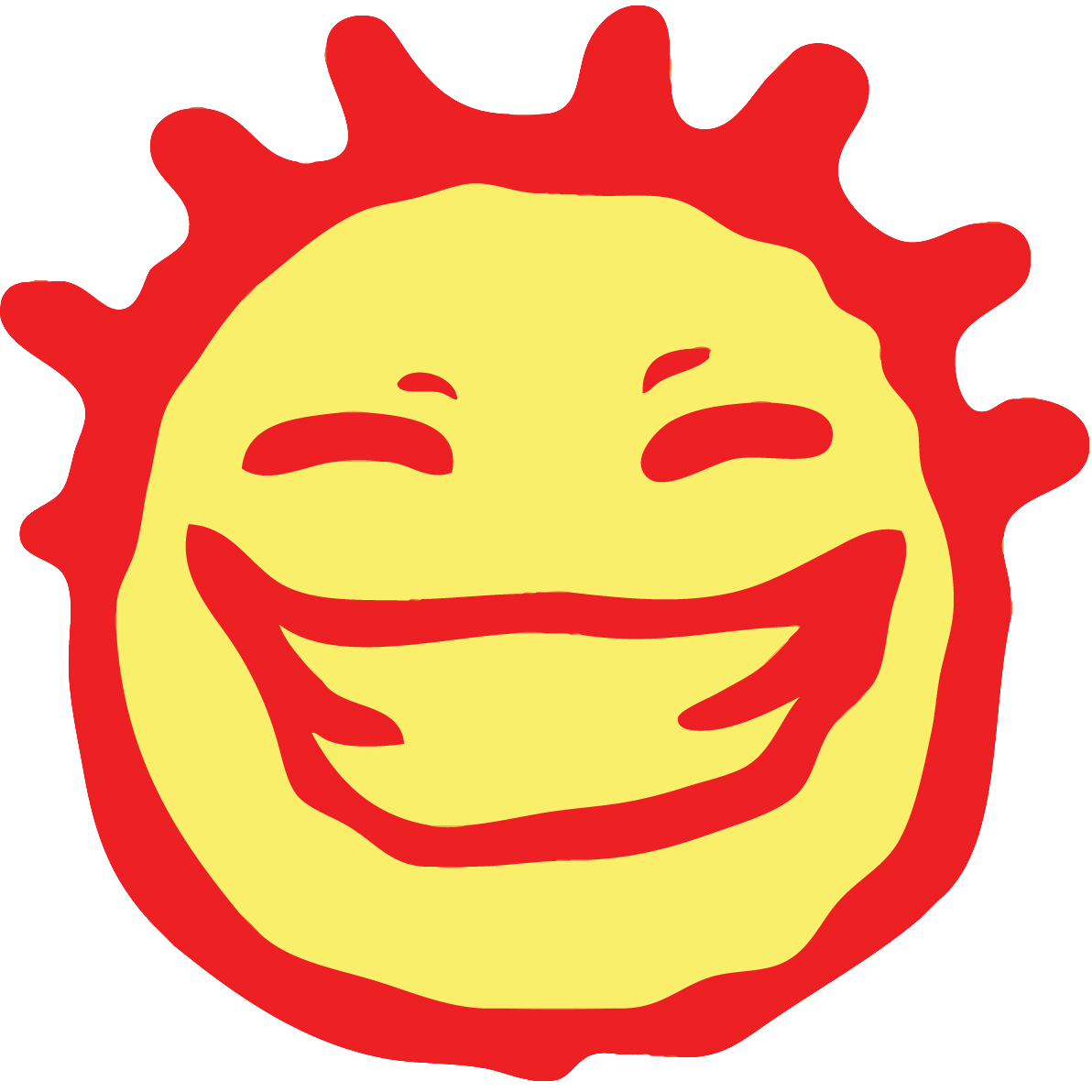