This review was generously donated to Nintendorks by Dany Shehab aka Encubed who blogs about board games and other things about once a year at everydaybetterguy.blogspot.com.

I was introduced to Legendary: A Marvel Deck Building Game at a board game night at our local game store, and picked up my own copy soon after. Despite not being the best-designed game ever, it’s fun, easy to learn, and the superheroes theme is interesting enough to get even your dumb Call-Of-Duty-playing cousins to give it a shot. 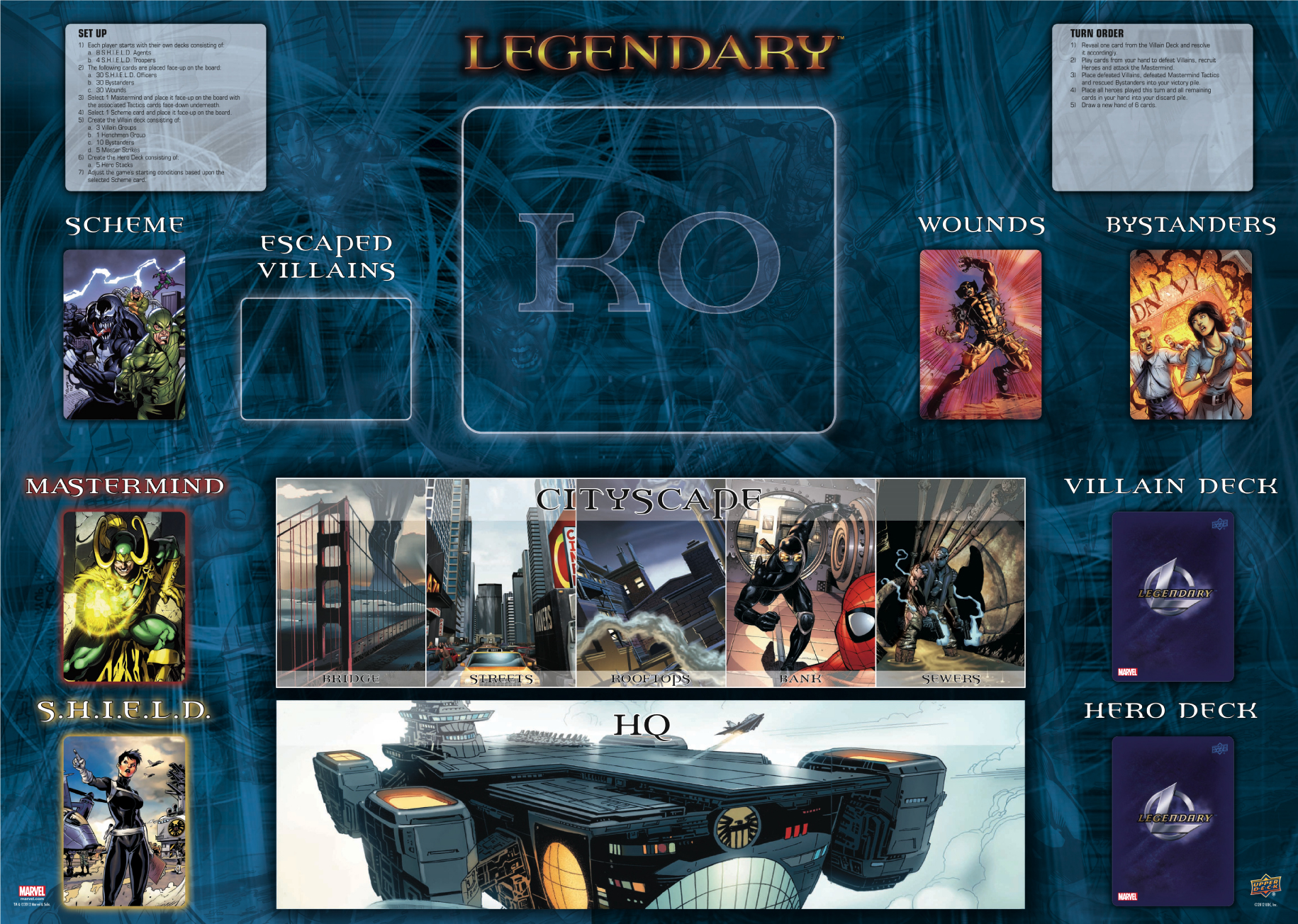 To set up each game, you:

1. Pick a Mastermind and their Scheme.

2. Assemble a Villains deck. This deck represents turn-by-turn events of the game, and in addition to the Villains, includes Henchmen, Scheme Twists, Bystanders, and the Master Mind’s “Master Strikes”.

3. Pick 5 Heroes who will try to rise up to the challenge presented by the Mastermind, his Scheme, and the various Villains.

Instead of each player taking control of a specific hero, they each get a starting deck of generic SHIELD Agents and Troopers (providing you with Damage points and Recruit points). Being a deck-building game one of the key mechanics is to use Recruit points that the SHIELD Agents generate to add new Heroes to your deck. These cards improve your deck by providing more recruit points, damage points, and other special abilities.

On the other hand, Damage points generated by SHIELD Troopers and other Heroes let you battle the Villains and Mastermind, generating the victory points essential to winning the game. I like to think of this deck-building mechanic as each player taking control of a SHIELD Director, who is competing with other players to issue commands to assemble a team of Heroes and lay the smackdown on the bad guys in the most awesome way possible. 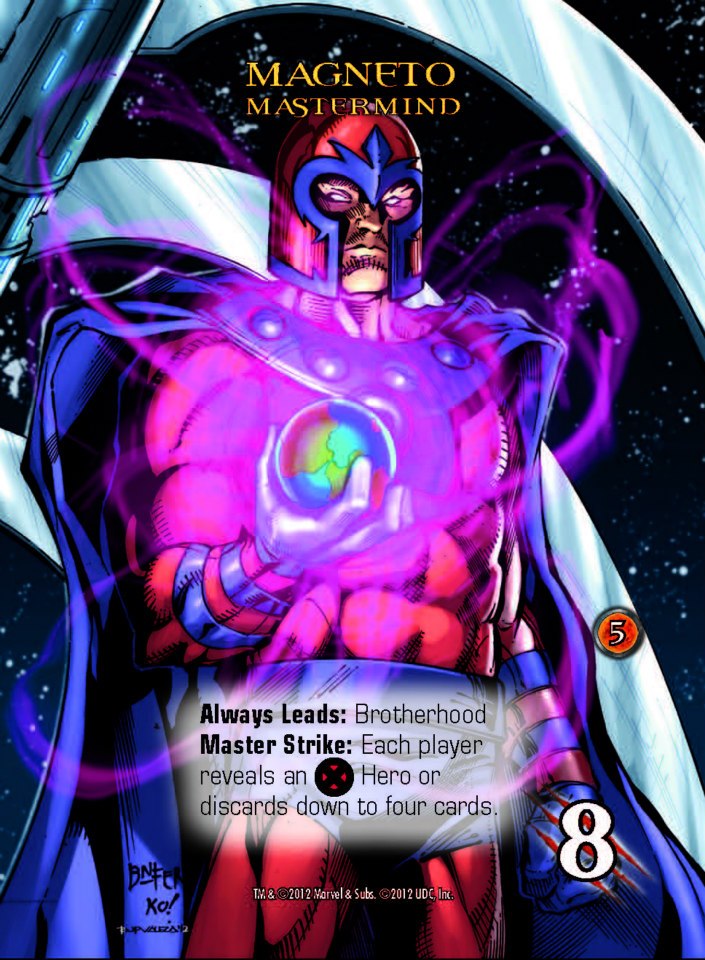 This game is true to how a superhero team operates: it has both the cooperative necessity of taking down the Mastermind together (otherwise, no Shawarmas!!), and individual scoring (AKA Hawkeye points) for taking down the most villains and getting the individual victory. If your friends hate losing to you, it can be played purely as a co-op game, but I’ve found it shines when everyone is playing competitively while also looking out for one another when the situation becomes dire.

Once the players have collectively fought the Mastermind four times, the heroes win and the game ends in a Final Showdown: each player tries to generate the most Fight and Recruit points from their hand to claim the fifth and last Mastermind card (which is worth lots of victory points)! However, if the Scheme condition is fulfilled, or the Villain deck runs out before the players are able to do this, the heroes fail and the Mastermind wins! Individual victory points are tallied to see who did best, but if you’ve collectively lost to the Red Skull’s Midtown Bank Robbery scheme, you hang your head in shame regardless of how many victory points you’ve earned.

The card stock is fine but not so great that I wouldn’t recommend sleeving the cards – I didn’t and it’s starting to show, though I HAVE played the game a lot. The artwork is of good to great quality, but it’s unfortunate that it is not more varied. Each hero, villain, and mastermind has only one piece of art on all of their cards, despite the cards having different text and abilities. It would have been nice to source varying artwork to make the game a bit more interesting to look at. It’s really weird seeing a card titled “The Legacy Virus” (an X-Men storyline) where the art features Venom, Doc Ock, and the Vulture – the standard art for all Schemes and Scheme Twists. The expansion fixes this somewhat for the new Heroes with 4 pieces of art each, but you’re still stuck with the singular art on all the base set cards.

Upper Deck’s designers have captured the idea of controlling a team of Superheroes to battle villains really, really well. The Villains move through different City Areas. Heroes are recruited from the HQ. Some card mechanics are a little counter to what you’d expect (why do villains escaping provide a positive effect? The answer: good for gameplay, even if it’s a little weird in terms of theme).

Learning the game is pretty easy, figuring out how to be good at it can take a few rounds. If you’ve ever played a deck-building game, there will be very little that’s new to learn here. 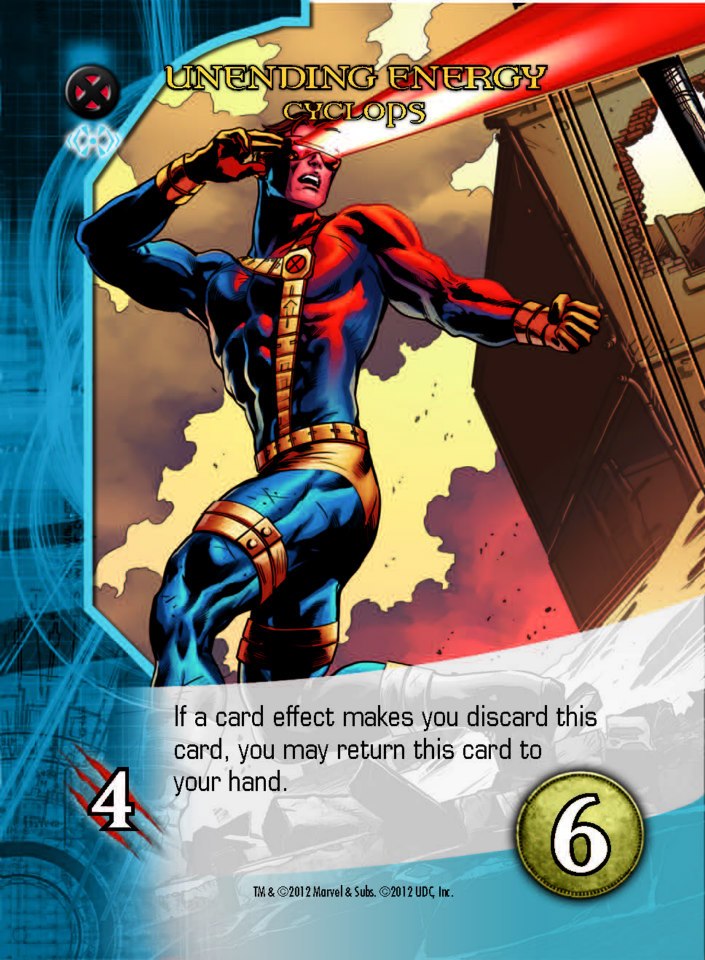 Much like the best deck-building game of all, Dominion, each setup can be randomly selected from a pool of cards (or deliberately selected, if you’re one of the two Cyclops fans in the world). The base set contains 4 Masterminds, 8 Schemes, 4 Henchmen groups, 7 Villain groups, and 15 Heroes. For the heroes you’ve got the usual suspects in the core movie Avengers, some X-Men, as well as Deadpool, Spidey, and (my personal favourite, gameplay-wise) Nick Fury. The Dark City expansion (described below) adds a whole slew of new cards, including more than doubling the number of Heroes, Villains, Schemes, and Masterminds. If you enjoy the game, the replayability factor is huge.

The core gameplay mechanics are both fun and challenging. The various superhero abilities translate surprisingly well into card form. Much of the decision-making revolves around recruiting Hero cards that work well together. Hero card effects are pretty simple – in addition to any recruit and damage points a cards gives you, there are five different types of hero cards (strength, tech, covert, ranged, and instinct) distinguished by a different colour outline and a logo. Some cards have bonus effects (for the most part limited to additional damage or recruit points, or simple mechanics like drawing extra cards or trashing cards) that trigger if you’ve already played a certain type of card that turn, and it may affect the order in which you end up playing the cards in your hand. With so many Heroes to pick from, the available combos will vary with each game – pulling off a surprise Spidey-Cyclops-Gambit combo attack on Loki can be pretty satisfying!

However, some of the mechanics don’t really make thematic sense – for example, whenever a Villain escapes the city you have to KO a Hero of your choice from the HQ. This may sound bad, but is actually useful to the players as it allows you to eliminate less useful hero cards and cycle towards better ones. But overall, the gameplay mechanics hold up for repeat games. Another small gripe with the game is the amount of time it takes to set up and tear down. For your first few games, this might end up taking almost as long as the game itself – but using a smartphone app for determining random setups, and learning how to delegate cleanup duties can substantially reduce this.

*The game moves pretty quickly: turns are short so you’re never waiting too long, you’re almost always playing all of the cards in your hand, and there is a limited number of decisions to make on any given turn. This might make the game sound simple, and to a certain extent it is – but it also makes it accessible, speedy, and fun.

Legendary is tough enough that you will have some intense games and close victories, losing to the Mastermind a bit less than half of the time. However, while the game supports 1-5 players, in my experience it was best balanced when played with 2 or 3, getting substantially harder with more people, and way too easy when solo-ed despite the additional solo rules. But that’s where house rules can come in!*

Also, the odds of getting a bad setup/bad draw is more common than I’d expect from a well-designed game, and can ruin the experience. Sometimes you just stand no chance against the Mastermind/Scheme (which is discouraging), and other times it can be a cakewalk (which is boring). Again, house rules can help: I personally recommend not allowing two Scheme twists or Master Strikes to happen in a row. If they do, shuffle the deck and draw another card! They can really ruin your game if they get clumped together.

If you like the idea of Marvel superheroes battling it out against villains in card form, buying this game is a no-brainer. If you’ve played the crap out of the more advanced deck-building games like Dominion, this will be a relatively light distraction, but on the other hand more friends will want to play it with you. And considering how few friends you likely have if you’ve read all the way to the end of this review, that’s probably a good thing.

Expansions: Legendary: Dark City, released in June 2013, adds 17 Heroes, 5 Masterminds, and a butt-load of other cards. The new Schemes and Masterminds make the game quite a bit harder, even when combined with old cards, so it’s great for experienced players, or for fans of the X-Men. Seriously, it brings the X-Men count up to 12, PLUS adds the X-Force faction with 6 other characters. It also adds the Marvel Knights faction, 6 street-level bad-asses including the Punisher, Daredevil, and everyone’s favourite: Iron Fist. The expansion also introduces a few new mechanics, but they’re pretty minor and feel as if they belonged in the game to begin with – not sure if that’s a compliment to the expansion, or a slight at the base set, but they feel like very organic additions.

Also coming soon is a Fantastic Four mini-expansion, as well as a confirmed “green, non-Marvel expansion” that I suspect will feature everyone’s favourite crime-fighting turtles. Upper Deck are also allegedly working on Organized Play rules – if you’re the tournament-playing type, the future of the game is looking bright.