I’m going to go out on a limb and say that caves are neat. They’re mysterious, full of cool rock formations, Batman lives in one, The Goonies explored one, and a good chunk of the world beneath us is still unexplored. Unfortunately I’m no speleologist, and the thought of spelunking into an unknown chasm only to get stuck halfway through a hole the size of my elbow and dying a dark painful death doesn’t appeal to me. Thankfully, Rebel.Pl‘s The Cave lets me pretend I’m spelunking safely in my own nerd cave! 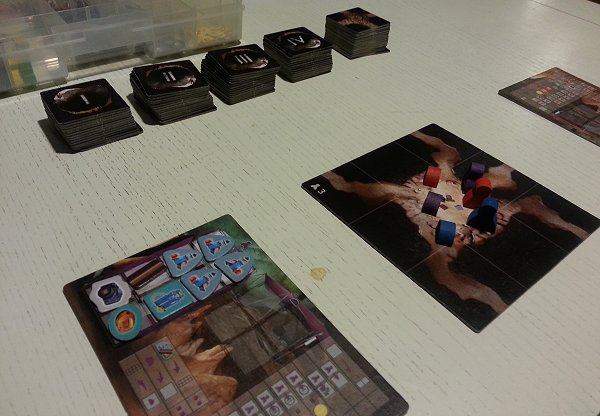 The premise is simple: you and other speleologists have discovered the opening of an unexplored cave. The Cave is a semi-cooperative, semi-competitive tile-flipping exploration game for 2 to 5 players. At the game’s start the base camp tile is the only area you’ve explored; depending on the number of players, this base camp has various exits branching out to choose from. With everyone’s gear all packed you’re ready to begin!

Each player has 5 Action Points (AP) to spend on each turn for a bevy of exploration activities. One of those basic activities is shining a light to discover an area of the cave adjacent to your current location. During the game’s setup, a number of tiles (depending on the # of players) are shuffled into four piles, labeled I through IV. Starting with the I pile and working through to the IV pile by the game’s end, a player can spend 1 AP to flip the top tile and place that tile on the table, so long as the new tile matches its entrance to your current location’s exit. Some tiles have multiple exits and it’s usually pretty easy to place a tile, but if there’s no legal placement for a tile you reveal, that tile is discarded and a boulder choke tile is placed in its spot. 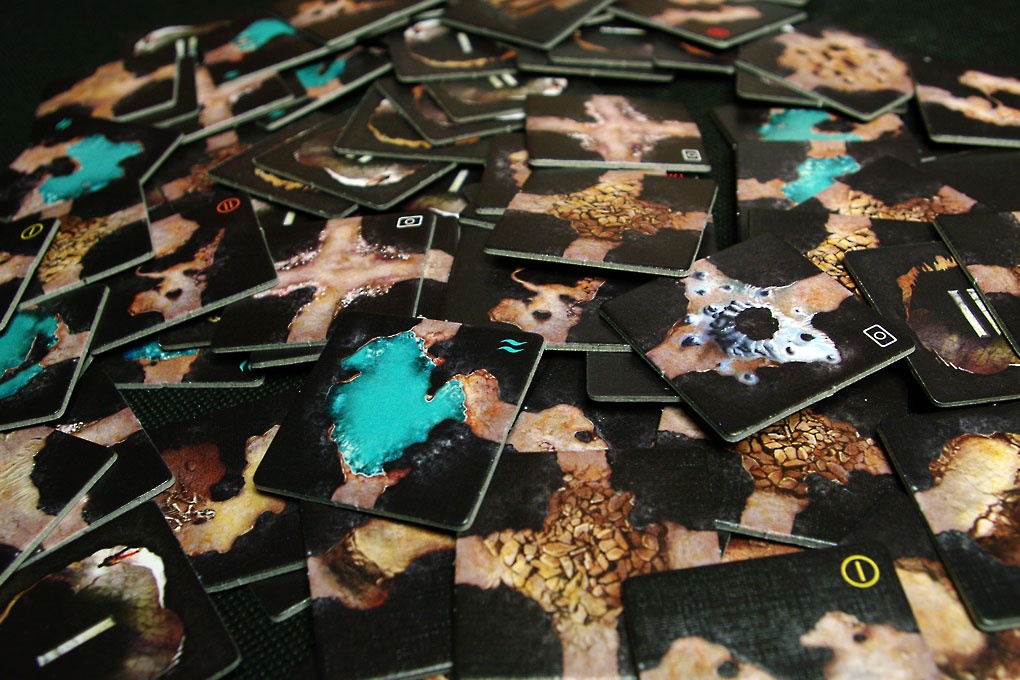 The tiles you discover reveal various features of the cave that you can then use your AP to explore and reap rewards; when a “special” tile is discovered, a corresponding exploration token is placed on that tile ripe for the picking. For example, tiles with a camera icon contain a natural wonder, and if you have a camera in your backpack you can spend 1 AP to collect the camera exploration token. As well, water tiles can be easily traversed with a raft (if you packed one!), BUT if you have a scuba tank in your backpack you can spend another AP to dive deep and collect the water exploration token.

Tight squeeze tiles come in varying difficulties and require additional AP to squeeze through. If you’re the first to squeeze through that tight space you’ll gain that tight squeeze exploration token, but be careful: token or not, it still requires the extra AP to move through those tiles each turn. When you’re trying to make it back to base camp to restock on supplies, these tight squeezes can put a real kink in your plans if you don’t think a few steps ahead. 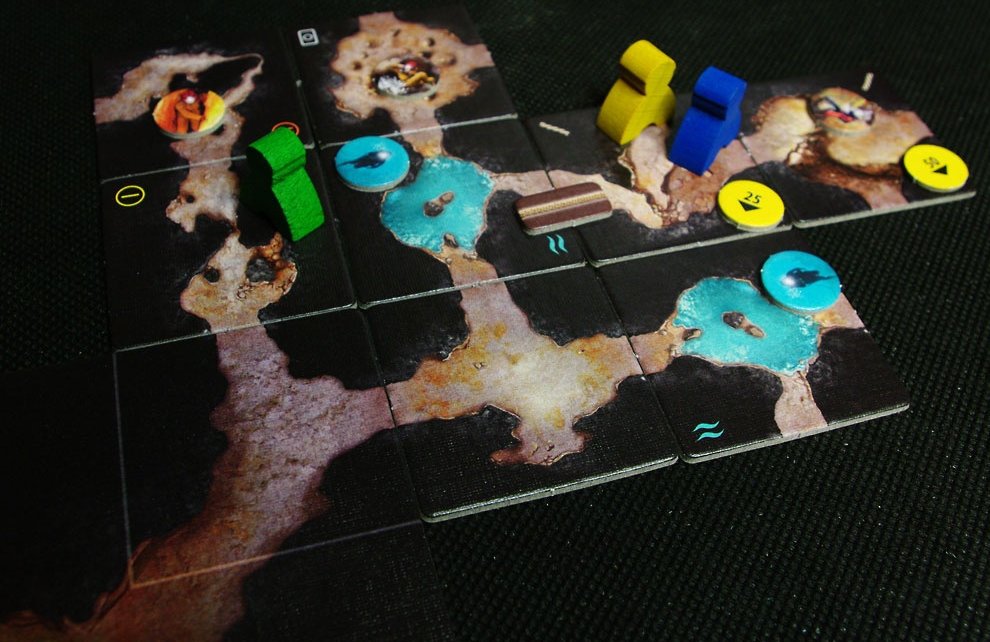 The base camp sits at zero meters, but what fun is a cave that doesn’t descend deep into the earth?! Descent tiles marked with a rope icon signify a 25 meter drop, and for each 25 meters you wish to descend you’ll need a rope in your backpack and the AP to place and traverse that rope. Once a rope is placed, any player can use it to ascend and descend in the cave, but for each rope you place, you’ll receive…that’s right, a traverse line exploration token!

Players will also receive a one-time bonus token the first time they reach a new depth in the cave; there’s yellow depth markers you can place on relevant tiles to remind you which depth you’re at, and it’s possible after further exploration for the cave to loop around and hit a tile at a different depth. Say you’re at 25 meters and discover a tile that touches another at 75 meters. In this situation you would need two ropes in your backpack (and 3 AP) if you wish to ascend/descend the 50 meter difference between those two tiles.

Your backpack only has room for 8 items, so resource management becomes a big component of exploring The Cave, especially considering you must eat food (unless you’re in base camp) before you can spend your 5 AP, so several of those backpack slots will be filled with consumables. 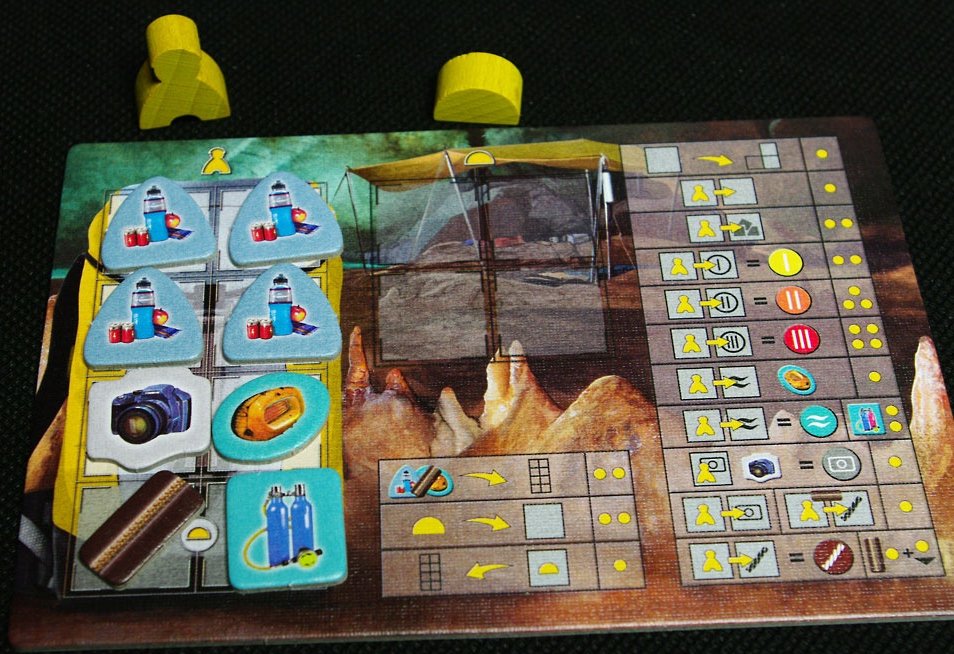 The game does a good job of making your turns feel like an expedition: you set out to discover some new areas, but at the same time you need to return to base camp periodically to restock on food and ropes and other items. If you run out of food–whether via poor planning or your own hubris–there is nothing you can do but spend all 5 AP per turn to move one tile closer to base camp. This can be a long, slow crawl made worse by watching your fellow speleologists happily reap the rewards of tiles you may have discovered but didn’t have the AP to explore.

One item that can help you stay out a bit longer is your tent. Taking up 2 slots in your backpack but holding 4 slots of storage, you can stock your tent full of stuff in base camp, pack the tent in your backpack to bring it with you as you explore, and set it up anywhere in the cave as a kind of mini base camp. It costs AP to do all of the above, and you’ll still need to return to base camp to restock eventually, but having items in your tent as a pit stop on longer explorations can make all the difference. 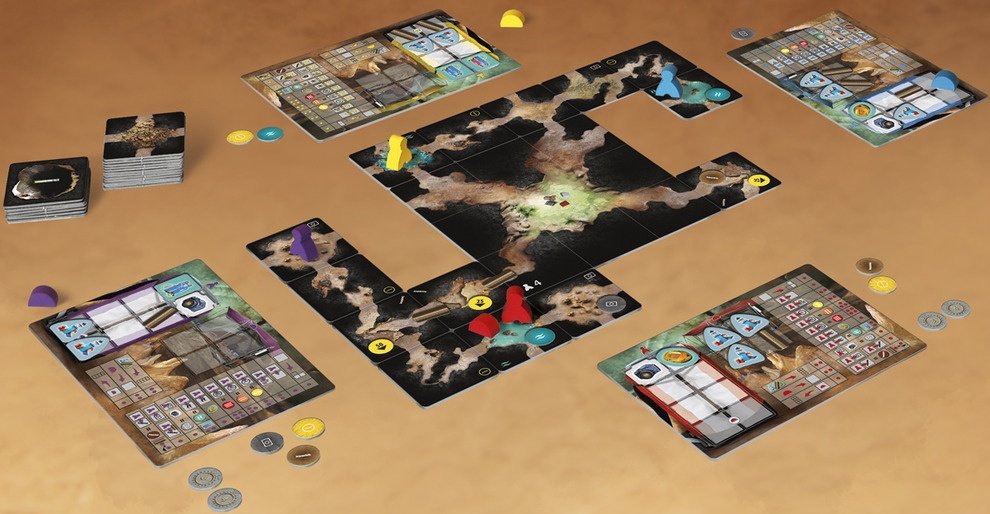 The average game lasts about an hour. Once the final tile from the IV pile is revealed, players get three full rounds of turns for final explorations and a return to base camp. If you’re not in base camp by the end of that final round consider all your hard work for naught: whatever tokens you may have gained throughout the game are worthless–basically you got lost and died in the cave, great job! If you made it back to base camp though, congratulations! Points are tallied based on all the tokens you’ve collected throughout the game, with some additional end-game bonus tokens awarded. The player with the most points wins!

If you like opening a game and punching out cardboard tokens, this is the game for you. The majority of components for this game are tokens, tokens, and more tokens, so thankfully they’re pretty sturdy cardboard to make them easy to handle (pro-tip: you can buy a bead organizer that fits in the game’s box for cheap, easy storage/organization). In a tile-flipping game where the tiles become the board, I appreciate the tiles having a good thickness with crisp art that makes the layout very easy to grasp. There’s not a lot of art you can fit on the little tokens, but what little is there still makes it easy to tell them apart. It would be nice if the each token’s point value was on there, but the end-of-game scoring isn’t all that complicated.

I haven’t listened to it yet, but Rebel.Pl shared a soundtrack you can download from their website to “wonderfully enhance the climate of your game.” It’s neat they did that, but soundtrack or not I think the spelunking theme is captured wonderfully in this game. You never know what’s around the corner, and you feel a real sense of exploration as you uncover tiles. More than once I’ve had a gameplan change just because I wanted to see what was down that rope and past that water…

The concept of the game is simple and easy to explain: on each turn you have 5 AP to explore this ever-unfolding cave. But there’s a lot you can do with those 5 AP, and even with the handy legend on your player card you may need to refer back to the rulebook to confirm certain things (especially with using your tent). The actions and tiles are simple, but there’s little rules here and there that you need to remember (you can’t just use a rope, for example. You have to have enough AP to lay down rope AND move up/down that rope). The rules aren’t difficult at all, but they are precise.

Even in a full 5 player game a few of the cave tiles are randomly removed when you’re setting up your four stacks to play from, and with each pile shuffled you never know what you’re going to get around that corner or on the other side of that tight squeeze. This random element makes every cave feel different, and it’s interesting to see how players react to playing the game as well. Some will really venture off while others will try to stick close to base camp. I’ve played The Cave quite a few times with different groups, and each game felt fresh. Thanks to the random setup elements and tile-flipping mechanic, the game will always maintain a sense of discovery.

I mentioned above about the rules being precise, and I mean that as a compliment. This is a very simple, precise game. There could have very easily been a random event deck to draw from where boulders roll after you or creepy monsters attack, but there isn’t. There could be actions to spend AP on for blowing up a wall or some other ridiculous nonsense, but there isn’t. This game is about exploring a cave, and that’s exactly what you do. I think there was also a nice job of playtesting and balancing the game when it comes to how many AP certain actions cost. Using the depth markers properly when the cave loops back on itself can take some practice, but requires minimal brain power.

Some players may find the exploration of The Cave a little mundane. Maybe they want cave ins, or a boulder chasing them, or a creepy monster hunting them down. I however find the tension born from the resource management and fear of getting stuck far away from base camp to be enough. Throw in the “friendly” competition of other players possibly cherry-picking your discoveries, and I think The Cave has a nice balance of excitement and relaxed wonder.

The Cave is a simple game on the surface, but has enough depth (pun intended!) to scratch the more serious gamer’s itch. Its theme is presented wonderfully, allowing various playing styles and appealing to a broad range of gamers.