This is pretty embarrassing to admit, but up until last week I’d never laid my hands on a Mega Man X game before. I guess growing up I’d just written the entire franchise off as some crap spinoff of the main MM series ala’ Battle Network or whatever but I couldn’t have been more wrong! Not long after downloading the first installment through the Wii U Virtual Console I discovered that this game is unbelievably awesome and as close to perfectly balanced as I can imagine. On one hand I certainly deserve to feel like an idiot for such a massive oversight but on the other, it’s one hell of a solid past me did for now me because I can’t put this thing down. In fact, I’ve been borderline obsessed enough to document the entire experience via screenshots through miiverse (snarky comments included) and now that my first of what I’m sure will be many playthroughs is all wrapped up, I’ve decided to share them with you! Isn’t that sweet? 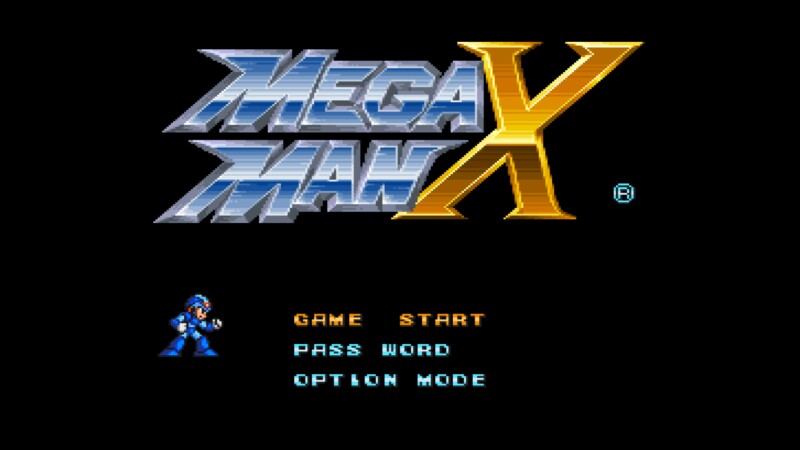 And here we begin with…well, the title screen of course. The included options menu allows you to map your buttons which is always welcome but guess what? The Wii U’s virtual console does this too and even better since its native gamepad has four shoulder buttons instead of only 2 like on the SNES controller. This means you can map your dash to ZR and weapon shift to ZL just as I did and feel nothing less than God-like while playing. 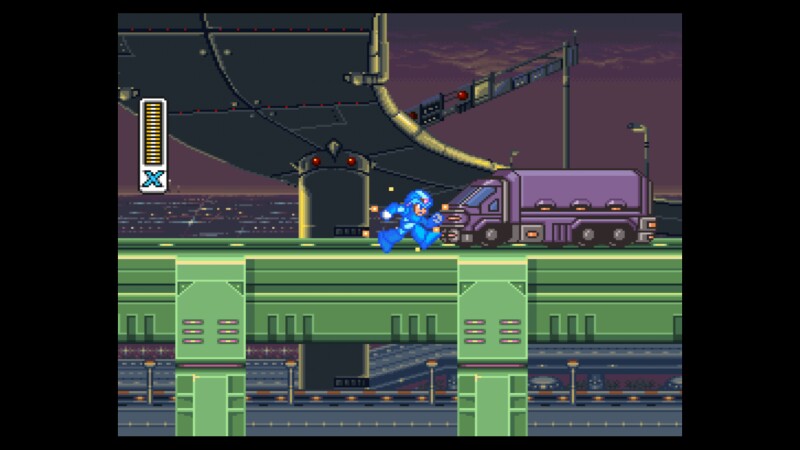 Press start and you’re up and running through a futuristic city that is apparently even more in the future than the regular Mega Man games. Oddly enough, cars still use tires even though pretty much every robot can hover and fly. Exploring this freeway area for a bit you’ll become acquainted with some of your basic moves. Standard practice like jumping, the ability to charge your mega buster (which is great) and wall jumping. I cannot stress enough how perfectly executed wall jumping is in this game. After years of enduring total shit shows in this area thanks to games like Strider for the NES and yes even the great Super Metroid, the level of ease with which this game provides that particular action is enough to make a grown man cry. But now is not the time for tears. 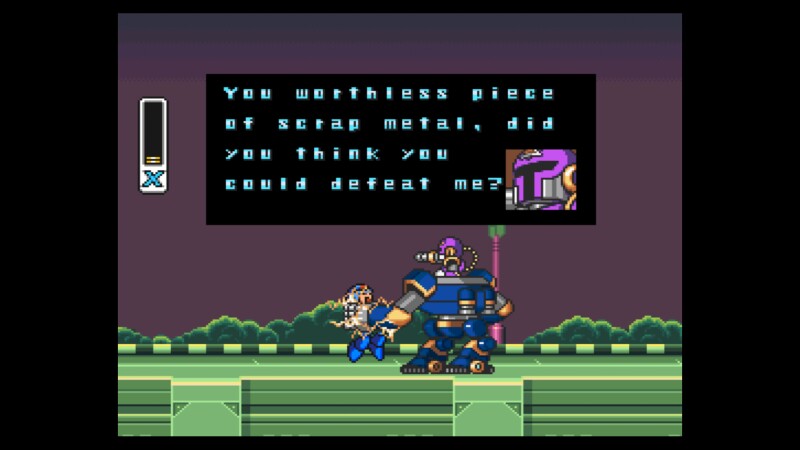 At the end of the stage, in pops some tranny Boba Fett who beats you within a couple lines of your health bar. There’s some story stuff that happens here involving that Zero guy but I’m playing this game to shoot things by God, not read.

Once the cut scene wraps up you find yourself at a good old fashioned robot mast-I mean “Mavericks” select screen. Of course with Mega Man games, tradition dictates that there’s a proper order with which to beat these chuckleheads, using the previously defeated bosses weapon that you snag upon victory against the next guy in line. I took this moment as an opportunity to post on Miiverse asking what that order is exactly and had my answers within moments. 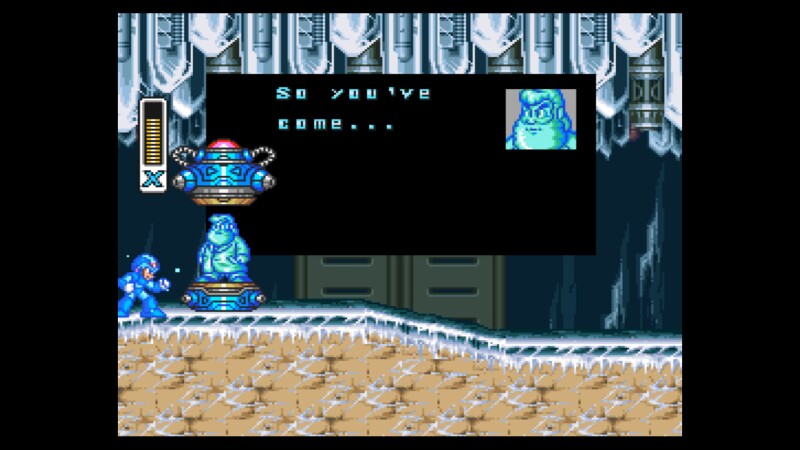 But before sending that popsicle back to the cooler, Obi Wan Kenobi shows up and hands over your first upgrade. This being the dash function I mentioned earlier which will get a lotta use throughout the entire game. Not only can you skirt through stages a bit quicker but it also comes in handy with wall jumps, effectively granting you the ability to rocket across the screen when timed right. God, I love being a turtle this game. 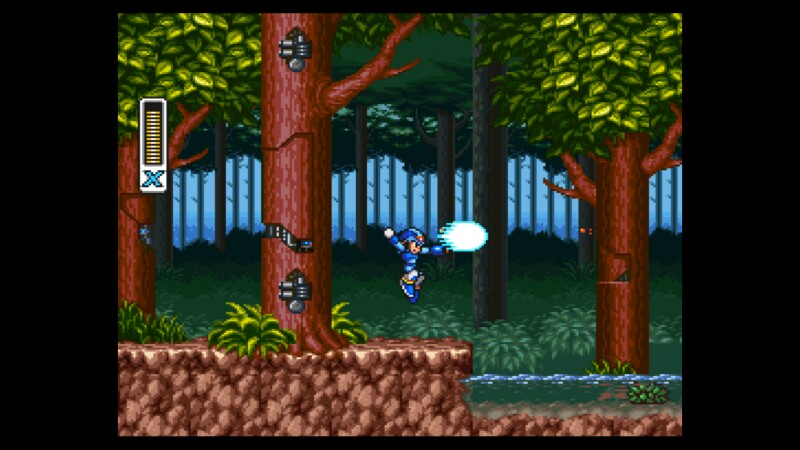 It’s at this point that I just began to muscle through all of the bosses or “mavericks” or whatever in the order I was given. Keep in mind, all of these screens are from my actual playthrough so are really more like punctuations than anything else. The above shot being impressive to me because 16-bit games really do look beautiful in HD. Anyway, the boss list I was given went as follows:

And it worked out just fine, however I had no idea I could extend my life bar by collecting those heart shaped icons that popped up here and there so I went through all 8 of these dipshits the old fashioned way. With half of my potential strength. 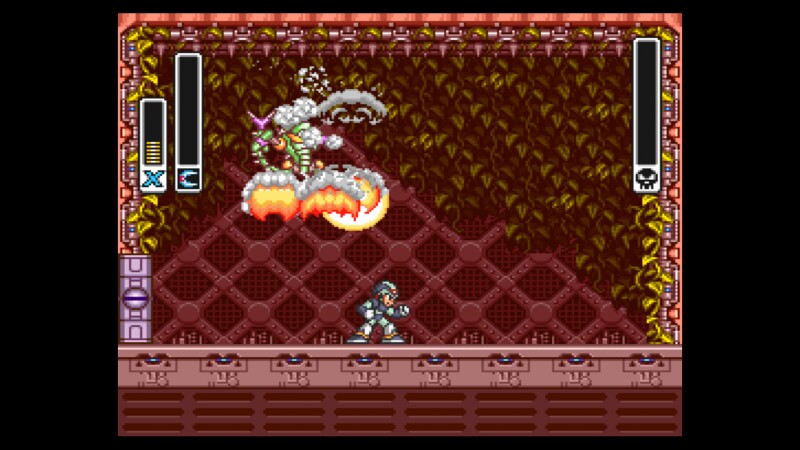 Which was a serious bitch once I got to Sting Chameleon. I must have failed miserably at least a couple dozen times using the cutter I’d acquired from Boomer. But by the time I finally took him out? Well, let’s just say my upstairs neighbors asked the police to stop by and congratulate me. 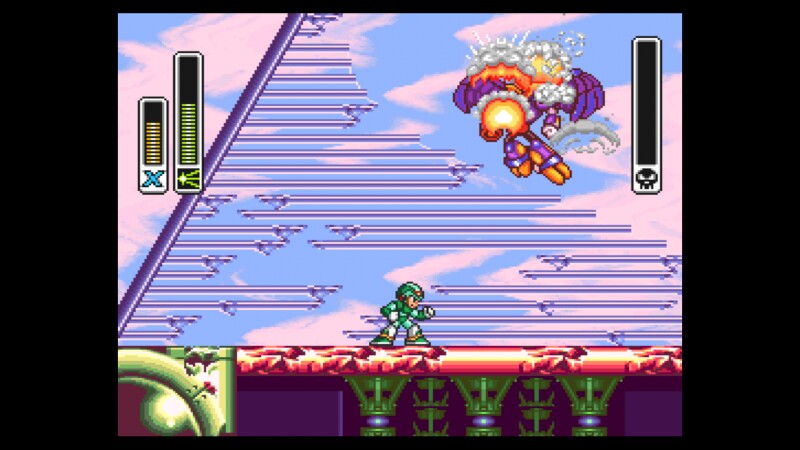 On to Sam, the Storm Eagle. Even with half a health bar, this guy was easy and his stage had a lot of cool opportunities to wall jump. I can’t believe I just typed that last part and meant it. 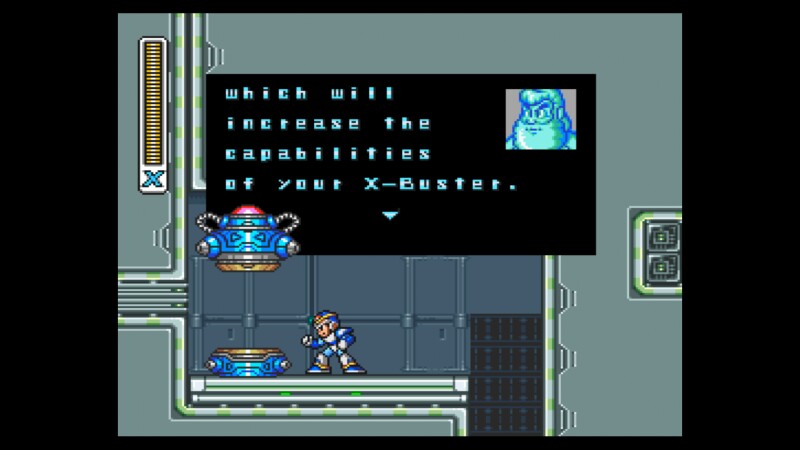 After defeating the main bosses I decided to go back and collect all of the powerups and health upgrades and everything else I’d been neglecting. There’s a head butt type helmet thing you can grab that’s needed to break through easily the hardest jump in the game. Which is crucial as its the only way to get to the SUPER charge and well…it took me a good chunk of time and every obscenity I’m familiar with to finally get it. This was absolutely worth all the effort in the end because once you’re at essentially 100%, there’s a very cool trick possible which will grant you easily the most awesome feature of the entire game. Maybe of any Mega Man for that matter. Maybe of anything ever. 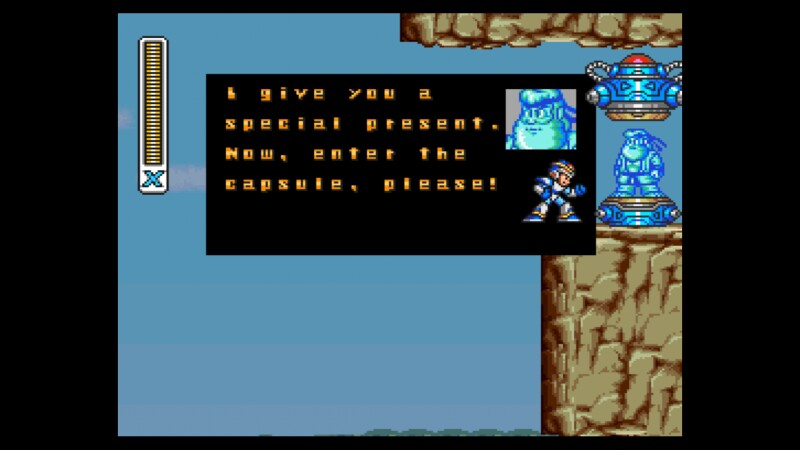 As it turns out, Obi Wan is a biiiig nerd for Street Fighter II. It’s probably an easy guess where this secret is located but I’ll leave the “how” up to you to find out. Let’s just say the end result is X (as he’s known I guess) being capable of firing a Ha-Do-Ken (or however that’s spelled) that will take out all of your enemies with one hit. It leaves you vulnerable for a good second, but works like a charm if you time it right. I had a BALL with the rest of the game once I added this to my repertoire. 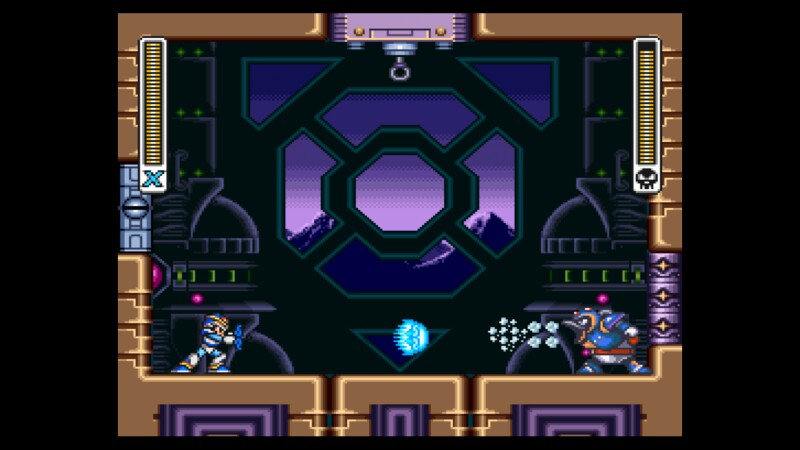 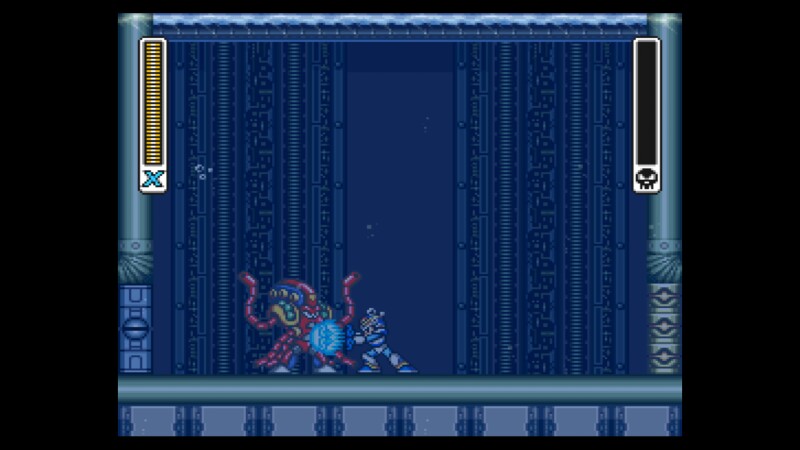 KA-BLAM. (oh right, btw you play against all the bosses one more time real quick toward the end but if you like Mega Man, you should know that already) 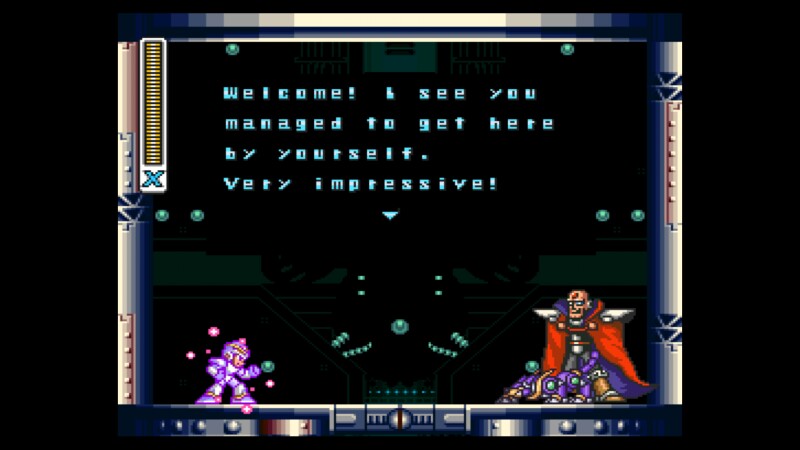 “Waitasec, final boss. I can’t hear you because I’m charging my little thingie up here.” 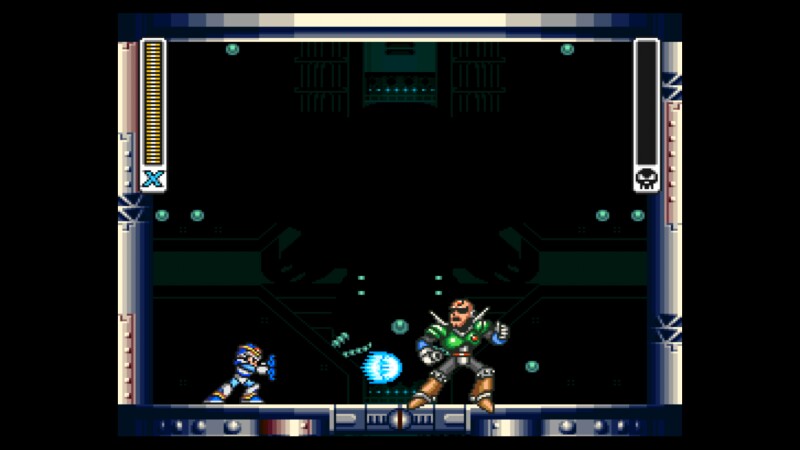 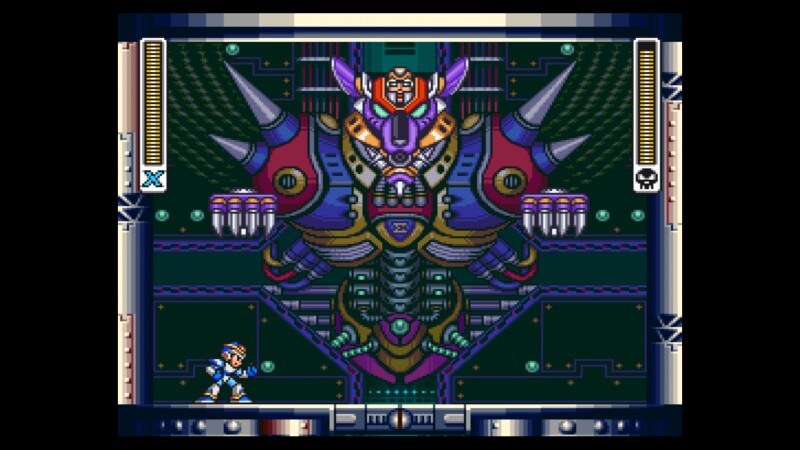 Fighting this final incarnation of whoever the last guy is was yet another scenario where I’d realized I’d been making life much harder for myself than it needed to be. I died a lot going after him with just fully charged shots from the mega buster and fancy walljumping. None of that was getting me anywhere so I decided to ask for some advice as to which maverick weapon was most effective. Turns out, the armadillo blast thing really does a nice chunk of damage but still wasn’t bringing his life bar down fast enough. Then I got a good heavy dose of how stupid I really am.

I’d forgot all about the reserve tanks! 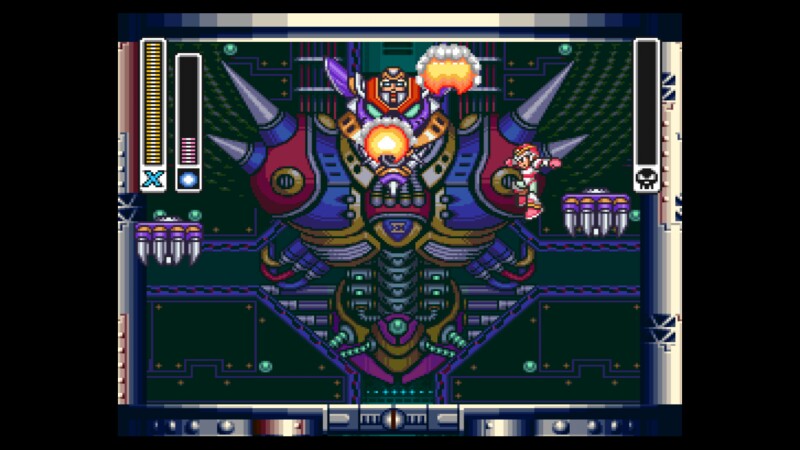 As you can see, this turned the tide of war in like a minute. 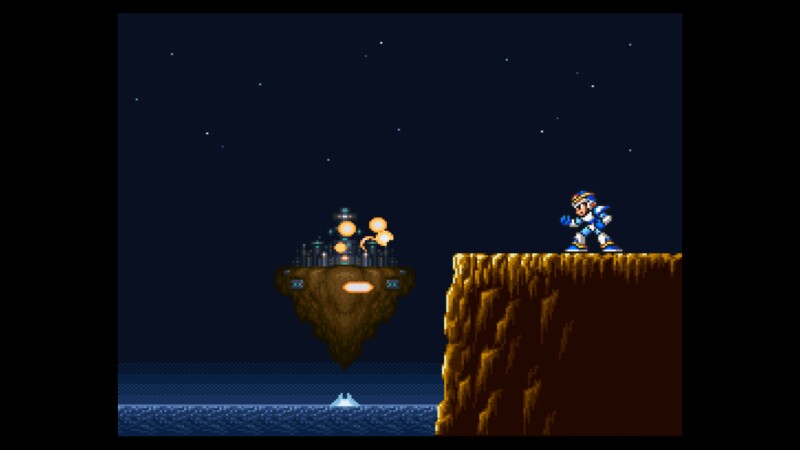 Which brings us to the end of our journey. Mega Man X is a game that I’m so unbelievably happy to have in my life now not only due to what a great first time experience it was but also because every pixel of it screams replayability. I legitimately can’t wait to go through it again knowing where all of those heart tanks are and to have a look at the secondary functions on the maverick weapons that I didn’t know existed until after I already beat this thing! Ok. I have to chill out and stop writing but I’ll leave you, my friends with a great quote from the closing scenes as well as what our old friend Mr. Face has to say about this game. He’s been a big fan of it for years and actually rolled his eyes when I asked his opinion of it. 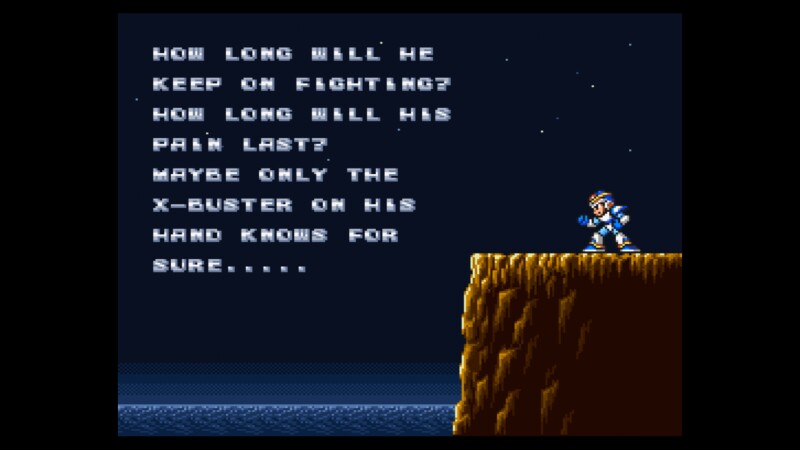