But that’s not all! According to the company’s official Japanese website, it appears as though Nintendo has finally caved in to the deafening silence of consumers around the globe and decided to release a “supreme” white version of their 32gb Wii U model. Previously restricted to only those silly little 8gb machines, this new color option will afford OCD early adopters of the original Wii the ability to get some goddamned sleep at night. If that weren’t enough news to make this article worth writing let alone read by you, then I guess it’s a good thing there’s more to report; this time in the controller battery life department. But in the interest of jacking up the word count, I’ve decided to take the scenic route and yap for a good while in this sentence before telling you to go ahead and scroll down to read more……..

Oh alright, go ahead and have a look already:

I’m actually a little surprised that it took this long for the big N to address the short battery life of their Wii U gamepad with an official replacement product. Because even playing with the brightness all the way down and the rumble/speakers turned off, this thing still typically lasts no more than 4 hours TOPS. Not that I really have time to play for much longer than that in one go these days anyway but still, the option would be nice. Looks like this will run about $40 bucks if it ever makes it out of Japan. 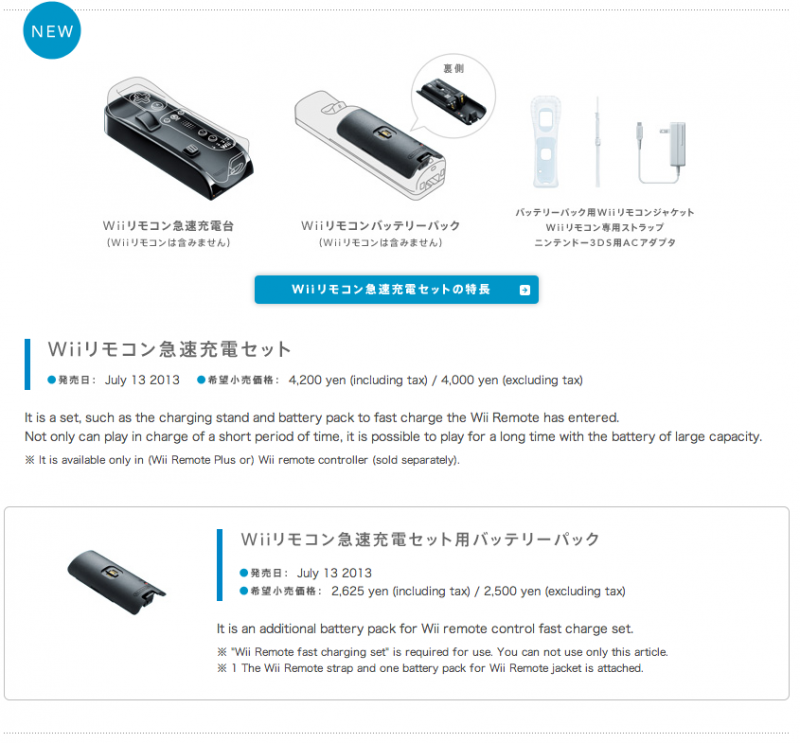 And whoa, what it is this? There have been many 3rd party rechargeable packs for Wii-remotes ever since the system launched back in 2006 but never one made by Nintendo themselves. Being a stickler for only purchasing “official” peripherals, I’ve made Costco rich with the amount of double A crates I’ve bought over the years so it’ll be nice to throw some money at this down the line. It looks like the battery alone will run about $25 and the battery w/charger is asking around $40 or so. The latter of course being what I’ll buy because for some reason I’m a sucker for placing electronic devices into cradles.

I have to say: It’s really nice to see the company finally pulling their heads out of their mushrooms and releasing stuff like this. I do have to complain however about the lack of one simple inclusion that would stave off just as many headaches induced from the glowing red ‘n dead battery icon. How about installing an on/off switch on these things ala’ the almighty Wavebird to save a little extra juice?

Just throwing that out there.