Well here’s something I’ve been sitting on for months. Back in November of last year my good friends over at Present Creative asked if I was interested in swinging by their studio in San Francisco to lend my likeness to a game they were working on. It was a sort of Mafia Wars-esque project and for one of the characters they just happened to need a guy with dark hair that wouldn’t feel out of place in something like Goodfellas. Clearly this was the kind of ego stroke I couldn’t refuse. I rushed up one morning and they threw on some sunglasses and a hat, telling me to pose in various expressions. Angry, happy, etc. It was the sort of thing that I easily would have done for free which made it even better because they actually paid me for it! Anyway the results are pretty cool and I’m excited to finally share them with you because as of today, Crime Connection is officially available wherever cell phones, laptops, ipads and pc’s can be found.

Produced by Taito (the Bubble Bobble people!), here are some details regarding the gameplay: 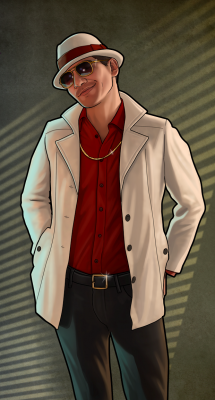 – Crime Connection is a social crime simulation game in which players assume the role of an ambitious gang leader, battling rival gangs to expand their turf and rise to the top of the underworld hierarchy.

– The action in Crime Connection takes place in Sunlight City, a glittering neon metropolis with a darker side. Players adopt a corner of the city as their base of operations, taking on missions and expanding their influence. Along the way, players will encounter characters and organizations both friend and foe as they construct housing and businesses in an effort to collect funds and materials to support their criminal racket. Clever and strategic expansion is needed if players are to grow in power and leave their mark on the city!

– In Crime Connection, players can use the buildings they’ve constructed to recruit and train the meanest gangstas Sunlight City has ever seen. These gangstas can then be lead into battle against rivals, with the winner taking over the losing gang’s territory. Build your own hardened fighting force and show your enemies who runs this town!

Well >I< think it sounds cool but clearly I'm intensely biased. I haven't had a chance to play it for myself yet because I'm still rockin' the burger phone (YES, I KNOW WHAT YEAR IT IS) but will probably take a crack at it somehow sometime soon. If you're curious, IGN has the first ten minutes of the game up which you can view by clicking this.

Or if you want to just jump right in, Download it from the App store for free here or check it out through Google Play over here.