The box for The Great Heartland Hauling Co. states it’s “a cubes and cards game for 2 to 4 truckers”, and I can’t think of a much better, or cuter, description. Funded on Kickstarter back in September and published by Dice Hate Me Games, The Great Heartland Hauling Co. has you and your buddies trucking back and forth across the country picking up and delivering goods for cold hard cash. It’s an incredibly well-balanced game: simple at first glance, but with enough depth to inject a fair amount of strategy into each game. 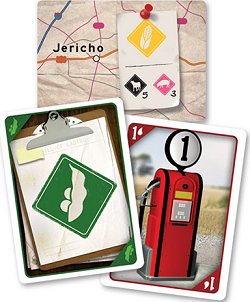 Each location card has a few icons on it. The larger icon indicates that location’s “Native Good.” There are four goods to be hauled in the game, each represented by their colored Cargo Crates (cubes): Cattle (black), Corn (yellow), Pigs (pink), and Soybean (green). Apart from the location cards are the Freight Bill and Fuel cards. Freight Bill cards display one of the goods–these are the cards used to load and unload Cargo Crates throughout the game. Fuel cards display a gas pump with a value of 1 to 3–naturally these are used to move your truck from location to location. The Freight and Fuel cards are shuffled together to form the game’s Draw Pile, and each player draws 5 cards. The top three cards are then flipped over and displayed next to the Draw Pile, much like the train cards in Ticket To Ride.

On each location card, 5 cubes are placed corresponding to that location’s Native Good. The truckers assemble at the Distribution Center, and with $5 in their pocket (marked on their scorecard) and 5 cards in their hand, play begins.

Each player’s turn is made up of three easy-to-follow phases:

Players take turns moving, loading and unloading for cash while keeping track of their money/score on their scorecard. Once a player makes a set amount of dollars (depending on the number of players), each other player gets one final turn, and the game ends. Anyone with cubes still on their truck is penalized some cash, and whoever has the most cash wins.

Games take between a half hour to an hour, and move at a pretty good speed (heh). It’s a simple, yet very elegant game with a surprising amount of depth the more you play. You can see with the rules above how decisions and resource management come into play. Do you spend a “2” Fuel card to drive to Bedford Falls and unload a couple Soybean crates for $3 each, or do you spend $3 to drive to Jericho and unload more Corn for $2 each? And if you choose to do that, what will your next turn be? And what happens if another player drives to the spot you wanted to and nooooo don’t pick up those Pig crates that’s what I was working toward! 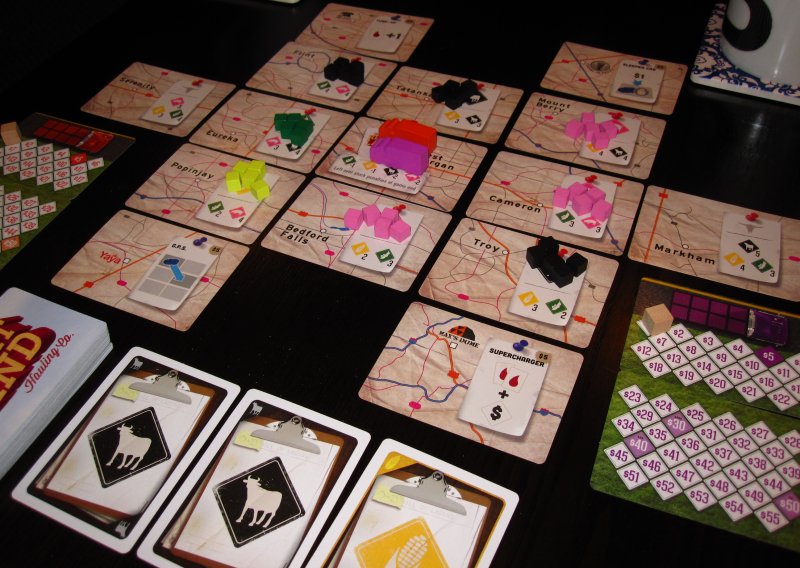 Like I mentioned above with shuffling the Distribution Center in with the location cards to randomize the game’s initial layout, there’s plenty of variants you can use to modify the gameplay. The most obvious being that each location card has an “advanced” side on the flip side of the card. Some locations have a “Roads Closed” icon which means you can’t move to or exit from that location in that direction. Some have a “Weigh Station” icon that makes you pay $1 for each crate your truck is carrying above 4. And other advanced location cards have a “Toll Road” icon where you have to pay $1 to enter or leave that location. And then there’s the truck stops…

Thanks to everyone who helped back this game on Kickstarter, Dice Hate Me Games were able to add a Truck Stop “inspantion” to the game. 12 new location cards are included, but instead of locations you hit to load/unload goods, they’re truck stops you can stop at to purchase upgrades for your truck. Each of the 12 upgrades are unique, with a few examples being the ability to move diagonally once per turn, or being able to combine cash with Fuel cards for moving, or be permitted to stop on locations occupied by other trucks. At the game’s setup Truck Stop cards are randomly chosen and placed around the outer edge of the map. If you move to a truck stop and pay the cash for the upgrade you place that truck stop card in front of you on your next turn (after you move) and your truck is now upgraded for the rest of the game! Only one upgrade per truck, and once an upgrade is bought it’s yours and yours alone.

The Truck Stops could have easily been a standalone or promo expansion, but it’s pretty great that they’re in the box. They help beef up the gameplay and add even more variation and random locations to each game. The rules suggest a few other variants, but they’re not totally necessary as the game plays great using the basic set-up and rules. Still, it shows that the game is strong enough on its own that you’re allowed to try out different variants and still have a good time, whereas with lesser designed games a variant on the gameplay or rules could ruin the entire experience.

On the one hand I love how compact the box is. It’s a great little game that fits in a great little box that’s perfect for (appropriately enough) travelling. On the other hand, I kind of wish the location cards were a stronger stock or maybe larger to give them more of a “game board” feel when they were laid out on the table, and I wish the scorecards were one piece that folded open instead of being two cards you simply place together. I haven’t decided yet if I would give up the compact box for those “improvements”, but everything else about the game from the colorful art to the nice wooden truck pieces (thanks again, kickstarters!) is high quality.

This could have easily been spaceships picking up and delivering Blorg Crates to different planets or monks picking up and delivering books to different cathedrals, but thankfully it’s not as there’s plenty of space and medieval themed games out there already. Maybe it’s being a huge fan of Smokey and the Bandit and having a soft spot for Americana, but I think the trucker theme feels fresh and works well with the gameplay. I also really like how the Truck Stop inspantion adds to that theme.

The rules are incredibly easy to follow and understand. First-timers may have to remember little things like you can’t stop on a location occupied by another truck, or you can only load/unload one type of good per turn, but those technicalities are easy to grasp.

Games don’t feel stale when played one after the other thanks to the new layout each time you play combined with the slight luck-of-the-draw factor in drawing cards. And thanks to the shorter play times it’s possible to play multiple games one after the other. Throw in varients like the advanced sides of each location card and each time you take the game for a drive can feel somewhat fresh.

Here is where I use the pun of the game being a well-oiled machine. The fact that you have to move on every turn keeps the game rolling, and the cards/cash mechanic makes for some nice resource managment and strategic decisions. You don’t normally see the word “elegant” associated with “18-Wheeler”, so kudos to designer Jason Kotarski for accomplishing this.

Gameplay is fast, smooth, and fun. The pick-up-put-down of all those cubes can shift and slide the cards some to make things a little more messy, so if you have OCD you’ll either love or hate straightening things while you play.

There isn’t anything too complex about The Great Heartland Hauling Co. and that’s a plus. It’s a fun, light game that’s easy enough for the casual gamer to play, but has enough depth and strategy to scratch the serious gamer’s itch. 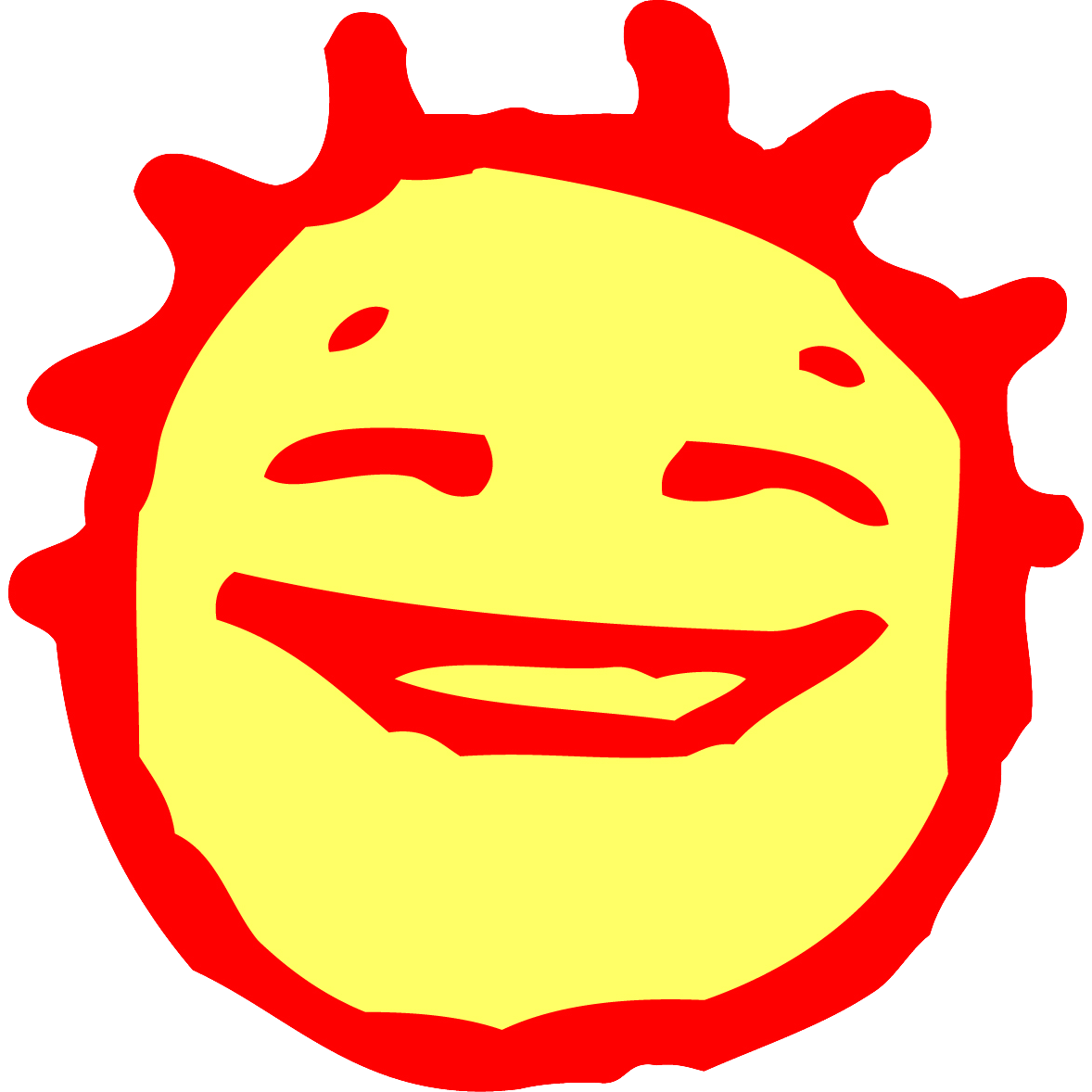 Expansions: Kickstarter backers hit a stretch goal to create the “Badlands” expansion. This added a purple truck piece to raise the player limit to 5, as well as introduce two new location cards to be placed on the outer edges of the map. The Badland locations don’t have Native Goods to pick up, but if you make the trip they’ll pay nicely for you to deliver some goods.