Oh that rascally Jack the Ripper has slaughtered yet another prostitute! The citizens of Whitechapel District have had enough of this tomfoolery, and it’s time to band together to catch the elusive serial killer. With the night getting darker by the hour, the chase is on. Either Jack gets caught tonight, or he escapes to terrorize Whitechapel another night.

Mr. Jack is a 2 player game where one player plays as Jack the Ripper trying to escape the Whitechapel District, and the other player plays as the detective trying to reveal and capture Jack. Of the eight character pieces on the board, one of them is Jack, and only Jack knows this secret identity. It’s up to Jack to not get caught, and it’s up to the detective to use his or her powers of deduction to track the serial killer down and serve up a hot plate of justice.

During the game’s setup, the eight character pieces are placed on their starting hexes, the gaslight lamps are placed on their lamp spots, the manhole covers are placed, and two of the four exits are blocked with police barricades. The rulebook has an image to follow with what goes where, and unlike some games that can take half an hour to set up before you even start playing, Mr. Jack is ready to go in minutes.

[![Mr. Jack board](/images/mrjack_board.jpg?resize=300%2C187 "It's best to play without the box sitting on the board")](/images/mrjack_board.jpg)This game is on Round 3. Jack is not visible, and the Sherlock (red) & Goodley (black) pieces have been flipped to their “innocent” side.
There are two decks of eight cards each: the character deck, and the alibi deck. Before the first round, the Jack player draws an alibi card and looks at it in secret. The character on that alibi card is Jack the Ripper, and that’s the character on the board Jack needs to either outwit the detective and not get caught, or escape the district under the cover of darkness. With Jack aware of his secret identity, round 1 begins.

For each round, 4 cards are flipped face-up from the character deck, and the detective and Jack alternate in choosing who they want to move. For the first round, the detective chooses one character to play, then Jack chooses two, then the detective plays the final character. This order is flipped for the even rounds. The board itself has a helpful track along the side to use with a clock tower marker to remind the players which round they’re on, and who chooses when.

Each character on the board can move 1 to 3 spaces, and has a different special ability. It’s these character pieces and abilities that drive the gameplay and strategy of Mr. Jack, because at the end of each round, the detective asks a very important question: Is Jack visible? A character is “visible” if it is next to any other character piece, next to a gaslight lamp, or in the beam of Watson’s lantern. If Jack is visible, any character on the board that’s NOT visible obviously can’t be Jack (logic!), so that character piece gets flipped over to its “innocent” side. Naturally, the reverse is true: if Jack is hiding in the dark somewhere, then any visible character’s token is flipped over to show their innocence.

Jack’s visibility and proving the characters’ innocence serves two purposes. One, it shrinks the pool of suspects for the detective. So during each round, the detective is trying to single out characters whereas Jack is trying to blend in with the crowd and hopefully end a round with the majority of remaining suspects all seen, or all unseen (with him being one of the majority). Jack’s visibility is also important because if a round ends with Jack hiding in the shadows (a seen/not seen card is used to show Jack’s current status), Jack is allowed to escape during the next round if he can make it through one of the two exits not blocked by Inspector Lestrade.

Speaking of the characters and their abilities, here’s an introduction and how their abilities affect the game, along with some of the game’s mechanics: 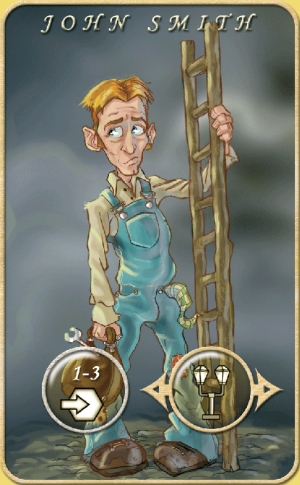 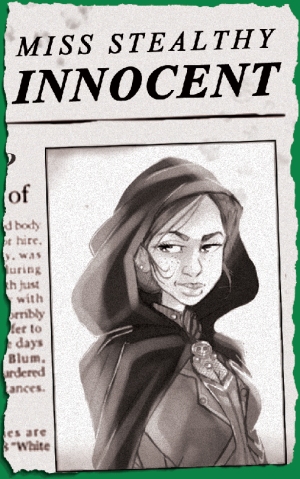 In most cases, Sherlock Holmes is the sought-after character to play; for the detective, drawing an alibi card (hopefully) helps narrow down the suspects whereas if Jack moves Sherlock, he’s able to remove an alibi card from the deck, therefore keeping more characters suspect. Other than Miss Stealthy walking through obstacles and Sir Gull switching places, all character abilities are mandatory. This adds a nice amount of strategy to the game, because whenever either player feels confident in the board’s layout, things are soon to change. This causes chess-like thinking of planning moves in advance, and with the mechanic of the 1-2-1 character choosing, it can also add a nice level of bluffing and wine-in-front-of-me mental debates.

In order to catch Jack, the detective player has to move any character onto his prime suspect’s hex before the eighth round ends, and declare that he thinks that character is Jack. If he’s right, the detective wins. If he’s wrong, the game is over and Jack wins. Jack also wins if he makes it through the 8 rounds without being caught, and as mentioned above, Jack can win if he’s able to slip out one of the district’s two unblocked exits under the cover of darkness. One would think that with three possible avenues to victory that the Jack player has the advantage. One would be wrong in thinking that.

Thanks to simple yet deep mechanics, Mr. Jack is very well-balanced, which may be its greatest strength. You don’t start a game of chess or checkers cursing that you’re not playing one side over the other, and the same can be said of Mr. Jack. I’ve won and lost almost equally playing as both the Detective and as Jack, and even though it seems the Detective has a slight advantage, that makes a Jack victory all the more rewarding. Whichever side you’re playing, you’ve got to stay on your toes and try to think two steps ahead of your opponent, and this deductive tug of war is what makes Mr. Jack a modern classic when it comes to 2 player games.

Calling the character and alibi decks “cards” is an understatement–they’re large, thick slabs of cardboard that look and feel great. The game itself looks great all around. With the mechanics behind it, it could have just been a bland hexagonal board, but the art and colors and quality of the components really shine. I suppose the pieces could be MORE than what they are–the characters could be figures instead of wooden discs, or the manhole covers could be metal discs, or the barricades could be little fences, but those changes wouldn’t really make the game itself play any better.

Kudos to the game designers for taking grisly serial killings and making a fun strategy game out of it! While there’s no blood and guts in Mr. Jack*, the theme and suspense of catching Jack is captured very well in the game. The art on the cards and board overall also does a nice job teleporting you to the Whitechapel District of 1888, albeit a semi-cartoony Whitechapel District in 1888.*

There’s two sides to learn to this game, and that on top of learning each of the 8 different characters abilities and how they work may take a little bit of effort. Fortunately, the rulebook comes in more languages than I can remember, and has very easy to follow rules in whatever language you speak. There’s also an FAQ page that’s been helpful more than once while we’ve played.

At it’s core, Mr. Jack is a little like Chess, except both players play the same pieces, the board changes after every turn, and only one side has a King, but its identity is hidden. So, not really like Chess at all, but it’s mechanics are that simple and solid, and it feels and plays like a classic game. In the long run it seems the Detective player has a slight advantage in the win/loss ratio, but the advantage is very slight, and won’t matter much to the casual player.

Add the deductive gameplay to the above mechanics, and you get some really engaging gameplay between the two players. Play is fairly basic, though with each game only lasting eight rounds, each game feels like a nail-biter. The downside, of course, is if the Jack player makes an early blunder, the pool of suspects can quickly shrink, resulting in a game that’s over by the third round. If Checkers is too routine and Chess requires too much quiet thinking, Mr. Jack is the happy medium.

Are you looking for a quick pick-up-and-and-play modern classic to replace stagnant 2 player deductive games like Mastermind or Battlehsip? Look no further than Mr. Jack*. A simple game with deep strategies, it’s one of the better 2 player games you’ll come across.*

Expansions: There’s a Mr. Jack: Extension that adds five new characters to the mix, and also changes the base game rules about the game’s setup. The pro is the extension adds a nice mix of randomness to what’s a fairly static board; the con is the extension adds a bit more time to set up, and all that randomness can increase the brain power needed for successful deductions. If you’ve played tons of Mr. Jack and want to breathe some new life into it, the extension is the way to go.

Then there’s Mr. Jack in New York. A more recent release that tightens up the core mechanics from the original Mr. Jack–namely expanding on what the extension introduces, which is a less-static, more random board layout. This is a stand-alone game, not an expansion, but I thought I’d mention it nonetheless.