Hey, remember the eighties? Saturday morning cartoons were still a ritual, Hostess was still a company, and Nintendo was still King of Video Games. Whether you remember them or not, or were even alive at the time, Retro City Rampage will reward you with that much more enjoyment if you have a passing familiarity with some of the cultural touchstones of the time, particularly famous (and infamous) video games that ruled the schoolyards. Starting development under the accurately descriptive banner of “Grand Theftendo”, the game’s final name captures the essence even better: it’s a love-letter to retro games, you rampage in a city, and the name itself is already a reference, being rather evocative of classic BARF! simulator River City Ransom. Indeed, the title almost serves as its own “people who like this sort of thing will find this the sort of thing that they like” review. So, there you go, then: that’s my review. That was easy, why didn’t I write this weeks ago?

Well, okay, there is a bit more to it than that.

Originally announced for WiiWare, *Retro City Rampage* finally launched on PC and PS3/PSVita in early October after several promised vague release periods and being nearly done for a year or more, and creator Brian Provinciano promises that it’s still coming to WiiWare and Xbox Live Arcade, no doubt held up a bit in their respective notorious red tape labyrinths. The overall game structure is familiar to anyone who ever played a *Grand Theft Auto* game, and those readers can feel free to skip to the next paragraph, but for those who never played *GTA* or one of its many followers here comes an overview. The game is played (for the most part) from a top-down perspective like the earlier entries in the *GTA* series. You play as a petty criminal named “The Player” in a decent-sized city called Theftropolis, getting around town either on foot or commandeering at the push of a button any of the many vehicles, whether parked or currently being operated by some near-future victim. Weapons can be obtained at stores or found lying around in alleys. Causing havoc will get the attention of the police, and a sustained rampage will eventually bring out the military and their fleet of tanks to stop your chicanery. The story is progressed through a number of missions, with typically one to three at a time being available to start by going to certain locations marked on the map. Optional distractions also exist, mostly killing sprees that ask you to off a certain number of people or vehicles, or achieve a certain score, with a given weapon in a time limit. There are a number of collectibles (hidden loot bags and payphone locations) that provide incentive to explore every nook and cranny in the city. 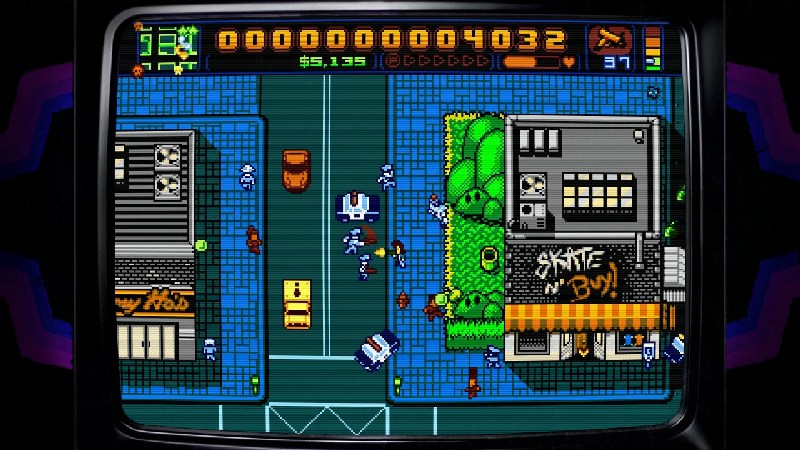 So far, all pretty standard stuff. The execution of it is also pretty standard, with a few notable details. For vehicle control you are given the option of the usual method of an acceleration button and steering clockwise/counterclockwise with right and left on the d-pad, or what the game calls automatic control, where you simply press the direction you want to go on the d-pad and the car will go in that direction. This is incredibly videogame-y as you can actually do a complete 180 without losing any speed just by pressing the opposite direction on the pad. You are free to swap between either control style at will, but automatic is probably more fun and definitely makes certain things much easier. On-foot control is simple press-the-direction-you-want-to-go, but it may still take some getting used to as the player character takes a moment or two to get up to speed from a standstill. It doesn’t drastically affect control but it’s a bit different at first and does take time to adjust.

There are a couple of nice additions on the main menu that haven’t shown up in as many games as they should have, and those are a freeplay mode and an arcade challenge mode. Freeplay sets you loose on the city either as The Player or one of several unlockable characters (most of them guest stars from other indie games who play a bit differently) and gives you the maximum amount of money and all of the weapons you’ve unlocked so far in the story mode with max ammo. You can’t start missions or minigames in this mode, but you can run hog wild blowing stuff up and trying to get as high a score as you can or search for the hidden loot bags and payphones. Arcade Challenges lets you select from a menu and try to get a gold medal on the various sprees you’ve unlocked so far without having to physically drive around the map. You can also replay certain story missions from this menu to achieve better times on them, in addition to replaying any section of any mission from the pause menu in story mode. There are trophies on PS3, and all of the tasks are on a checklist in the game itself, so Wii owners will be able to perform the same optional challenges and receive some recognition, if only from the game itself. Come to think of it, I don’t know that anyone but me looks at my trophies anyway, so it’s basically the same. 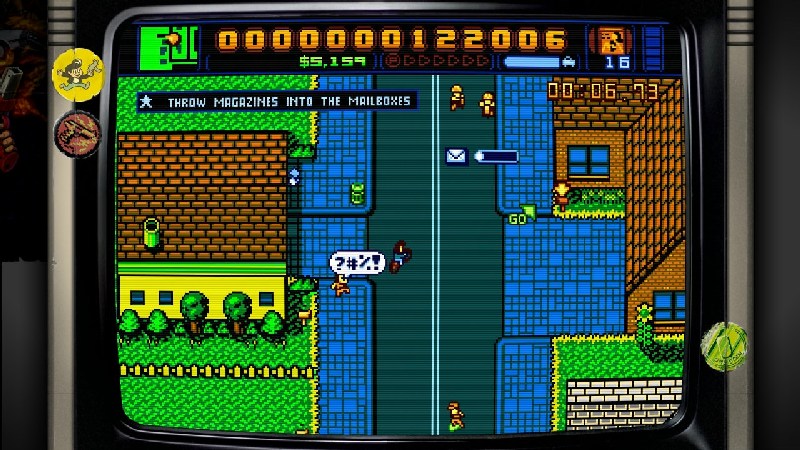 Now for what really sets Retro City Rampage apart from other open world vehicle-stealing games. The NES-inspired graphics are an obvious style point, and the game runs even further with things on that front, offering a variety of color schemes, filters, and screen borders to provide the retro game experience façade of any player’s dreams. There are presets to make the game look like it’s being played on an arcade cabinet, old TV screen, Game Boy, Virtual Boy, or even old home computers, all the way to and including Britain’s beloved ZX Spectrum. Now THAT’s dedication. Scanlines can be turned on or off and color schemes can be mixed and matched with any of the screen types, and this can all be turned off and played in glorious full modern widescreen if you want. You’ll probably ignore the monochrome or limited schemes for the most part aside from trying them out just to see, but just having these options is kind of amazing. Also amazing is the music, authentically-limited NES-style chiptunes from four different composers well-known in “the scene.” None of the tunes quite climb to the highest heights reached by Mega Man, Castlevania, or Sunsoft, but several of the songs are catchy and all of the score is uncannily appropriate. The music eschews aiming for the catchy greatness of all-time masterpieces to cover a pretty wide spectrum of sound reminiscent of what one would hear while playing a stack of rented NES games over a lazy weekend. Together these things really set the tone (pun not intended but welcomed with open arms) for everything that follows.

And what follows is a densely-packed reference festival that plays on the childhood memories of 25-to-40 year-old gamers like a goddamn xylophone. It really can’t be overstated how many pop culture references are crammed into the game. They come in all shapes, sizes, and colors, from tiny background details and bits of character dialog to entire missions modeled on particular games, from 80s movies, TV, and music to the occasional riff on a more recent movie. The first mission alone- ostensibly a simple bank heist and getaway- is *overwhelming* with how much it crams in over the course of events, both in gameplay segments and references (I lost count while playing, [click here for a list](http://pastebin.com/NbSJcuEw "Spoilers!") of what I noticed.) It opens with a bang to confound you and get you hooked. Things do slow down to a more familiar and comfortable pace afterwards, but not more than the game feels that it has to, if that makes sense. Businesses around town are almost all slyly named puns on something or other, like the Graves & Goblets Pub with a familiar demon silhouette logo, or the headgear emporium where you can purchase a variety of chapeaus to customize your look: Wonder Hats. Several of the cars you can drive have obvious inspirations. References are often smashed together to make something new, and missions will switch up gameplay at several points to cram even more in. Oftentimes it’s funny. Less frequently but still common, the joke falls flat. The references seem to teeter about on the line between *Simpsons*-style homage and *Family Guy* “here’s a reference isn’t that funny?” stupidity. The former quality is most frequently exhibited by the staggering number of rather specific game parodies, such as the dam level shown in the trailer that takes direct inspiration from the infamous dam in Ultra’s first *Teenage Mutant Ninja Turtles* NES game and made many cry out in delighted recognition at its reveal, or the *Tapper*-inspired segement of the *Ghostbusters* parody mission. The *Ghostbusters* parody as a whole, though, is an example of a joke that failed for me. I wasn’t ever exactly sure what these parody Ghostbusters actually did for a living- it all has something to do with strip clubs and isn’t terribly funny. I found it best not to think about a lot of the particulars too hard, as things go by at such a brisk clip anyway that they seldom matter for long. It would be way too easy to go on and on about all of this, as there’s just *so much*, but it suffices to say there are plenty of hilarious moments and surprises and a handful of real clunkers. If any kind of reference humor strikes you as lazy or sends you into a rage then you will want to steer clear, however. Speaking of getting sent into a rage and steering clear, it should be noted that the retro theme extends at times to the difficulty of a handful of missions, though a recent patch addressed this by adding more checkpoints to some of the longer ones, and making one formerly mandatory and notorious mission (where probably half of my deaths on the counter came from) skippable after you fail enough, though you’ll miss out on some bonus content if you take the out. I played through before this patch, but reading the [tweak list](http://retrocityrampage.com/blog/2012/11/retro-city-rampage-update-patch-november-15th-2012/ "Possible spoilers beyond here!") it seems to me the changes preserve the challenge for the most part while eliminating some of the tedium and player confusion. 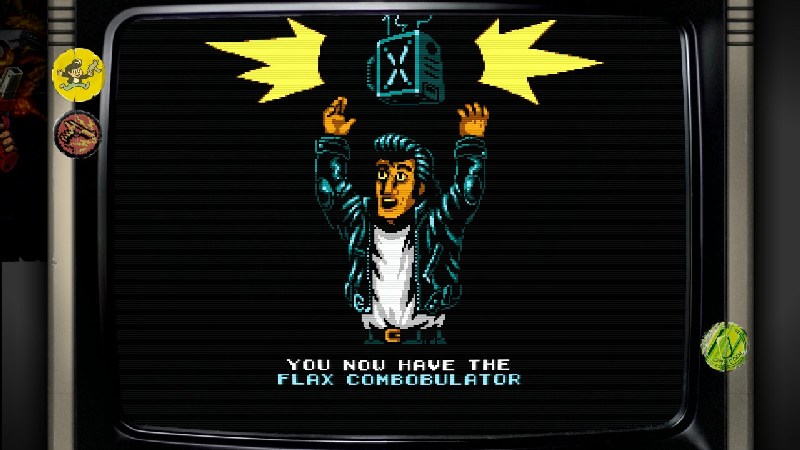 The overall impression I am left with after playing through the game can be summarized as follows: It is quite evidently the result of a clear, unifying authorial voice and vision. I can’t think of many other games I can say that about with the same force, even quality games or other indie games developed by one person. Once again, this is a characteristic hinted at by the title screen, where “Brian Provinciano’s Retro City Rampage” is given as the full title. It isn’t a boast or an ego trip in the slightest; it’s just declarative. Retro City Rampage sticks to its convictions, and that in itself is something I admire. The end result is a fast-paced GTA-like with a distinct style that won’t win with everyone, but it pleases the target audience. If you’re reading this review on this site, you’re probably in that audience.