Published in 2008 by Rio Grande Games, and winner of the 2009 Spiel des Jahres, Dominion has become one of the most influential games in recent history. Acheiving true crossover success the likes of Settlers of Catan, and with more expansions than I care to count, Dominion will be around for a long, long time, and that’s fine by me–it’s a fantastic game that I’ll be playing for a long, long time.

Dominion is a deck-building game, and it should be mentioned that thanks to Dominion, “deck-building” is now a genre in the world of tabletop games. Before Dominion, deck-building was mostly associated with collectible card games like Magic: The Gathering. There, you build your deck of collectible cards–spending the time to refine and replace cards to give you what you think is a truly great deck for battling your opponents. With your deck all built and ready, you then actually play Magic, and your deck is your deck throughout that game; static and unchanging. In this case, deck-building in CCGs like Magic is the meta game–It’s what you do for fun when you aren’t playing Magic. Dominion takes that meta fun of creating your deck, and makes that the focus of the game. 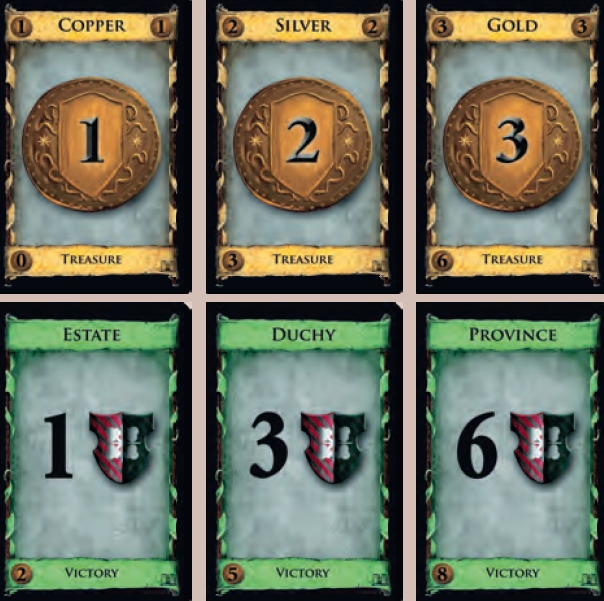 Games are set up by placing the yellow treasure decks and green victory decks in front of everyone, and then 10 decks are randomly chosen from the game’s 25 different kingdom cards. I would suggest using the supply deck setup the rulebook recommends for your first game just to get the hang of the basics, but normally the 10 kingdom decks are chosen randomly.

The game gives you an extra card from each deck of kingdom cards to create a randomizer deck to determine which 10 decks are placed in the supply area, but of course there’s also an app for that. With all the cards set up in the supply, each player is dealt 3 Estate victory cards and 7 Copper treasure cards to form their original dominion deck. Your dominion deck is shuffled, you deal yourself 5 cards, and the game begins.

Learning the phases of each turn is as easy as A, B, C: Action — Buy — Cleanup. Congratulations, you just learned how to play Dominion.

At the start of each turn you are granted the ability to play one action card, and then buy one card from the supply. For your first turn two turns you’ll have no action cards (because your dominion deck only has 3 Estates and 7 Coppers), so you’ll skip that phase and move on to buy. Let’s say for your first hand of the game you’ve dealt yourself 3 Copper cards, and 2 Estate cards–do you spend that 3 bucks to buy a Silver treasure coin (worth 2 bucks on future turns, whereas Copper are only worth 1), or do you buy the Woodcutter action card, which gives you an extra 2 bucks during your buy phase, as well as an extra buy (letting you buy TWO cards instead of one)? Or do you buy the Village, which when played lets you draw a card from your dominion deck, and then play 2 more actions (if you have any more to play)? The glory of Dominion can be seen from your very first turn–you are instantly planning strategies, working toward card combinations that you think/hope will help you in the long run. 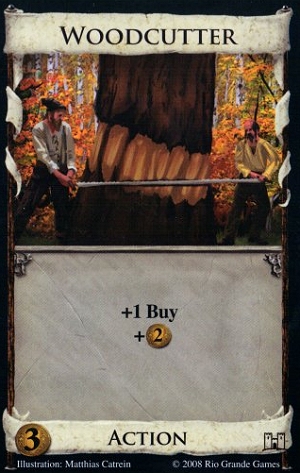 You’ll soon learn that the green victory cards are worthless as you play the game, but it’s the victory points (VP) on those cards that count as your final score at the end of the game. The balance between victory cards acting as points after the game but dead weight during the game adds another level of strategy to Dominion. You don’t want to buy victory cards right off the bat because in the beginning your deck is thin, and you don’t want to be drawing useless victory cards. So you build. With each turn you collect cash and kingdom cards to add to your dominion deck. As your deck builds, your strategy takes shape, and this is where the game really shines: with so many different card combinations, rarely are two strategies ever the same, and most strategies can be altered on the fly to adapt to the other player’s strategies.

For example, some kingdom cards attack your opponents. The Militia card forces other players to discard cards from their hand. The Theif card can trash a treasure card from your opponent’s deck and put it in your deck. The Witch card can give other players a purple Curse card (-1 VP at the game’s end). These attack cards sit in the supply like sleeping lions–they’re harmless just sitting there, but as soon as someone buys an attack card the lion is poked and fur starts flying. Luckily another great aspect of Dominion is its balance between all its cards.

The Moat, for example, is a “reaction” card–if it’s in your hand when someone plays one of the above-mentioned attack cards, show it, and you are immune to attack (for that turn). So if someone starts buying Witches, you could stock up on Moat cards (which are 3 bucks cheaper than Witches), hoping to have them in your hand when Witches rear their ugly heads. This is assuming, of course, that the Moat card made it into one of the 10 supply piles when you randomized them at the start of the game. Perhaps instead you could buy the Remodel card, which lets you trash a card from your hand in exchange for a card that costs up to two more bucks than the one you trashed. Remodel a Curse card and gain an Estate! Or a Moat! Or a Chapel! Or a…you get the idea! 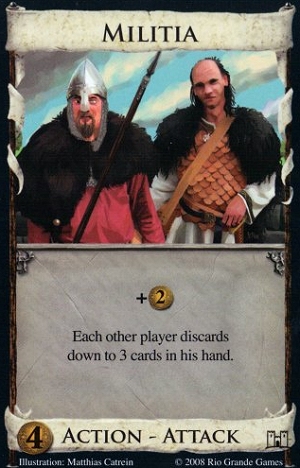 The game ends when one of two things happen: The Province (victory card worth 6 VP) deck is depleted, or any other 3 decks are depleted. Players sort out their green victory cards (and purple Curse cards, if any), add up all thier VPs, and the highest number wins. A simple scoring system for a simple game, but don’t let the simplicity fool you. Dominion is an incredibly deep game, and it’s this depth that will bring you back and back again. With only 10 supply decks being chosen from 25 kingdom cards, no two games are alike, and you’re constantly discovering new card combos and strategies that may or may not work during your next game.

I’m not one to sleeve cards, especially when there’s 500 of them, but if you care about the longevity of your cards, Dominion involves a lot of shuffling, and the cards aren’t of the heaviest stock. That said, I’ve owned the game for over 3 years, have played PLENTY, and my cards are all still in good condition. The artwork on the cards is colorful, and the box comes with a great card divider that makes it easy to organize all those kingdom decks.

I didn’t touch on the theme/story in the review because there isn’t much of one. The rulebook explains that you are a monarch, competing against other monarchs to build a kingdom your parents would be proud of, and that’s about it. The artwork on the cards does a great job keeping you in that medieval frame of mind, but essentially the theme and story doesn’t factor in too much to the actual gameplay.

A, B, C. Action. Buy. Cleanup. Remember? It’s that simple. There may be some card combinations that involve keeping track of extra actions and buys, but for the most part the game is very simple and straightforward. On top of that, the rules offer more detailed explanations for every kingdom card should you have any card-specific questions. For the questions I had when I first started playing, the rules answered everything clearly.

I’m not a mathematician, so I’m not going to pretend to figure out how many different combinations there could be for any given game. 10 kingdom decks randomly selected from a supply of 25 equals what is known as “a lot” of variation. Throw in a few expansions to chose from and you reach a “metric assload” of variation. You can play a game where one card acts as minor support to your strategy, another game where that same card is your key to victory, and then another game where that same card could combine with another to open up a whole new strategy.

The reason there is now a deck-building genre in tabletop games is because Dominion proved how solid that mechanic can be. With simple rules, simple turn phases, and simple mechanics, Dominion is downright graceful. There may be times where keeping track of all the extra actions and buys from chaining card combos can be cumbersome, but that also depends on which side of the table you’re sitting at. At times it can feel like there’s a LOT of shuffling going on, but games run like a well-oiled machine once everyone gets the hang of the mechanics. One downside to the large pool of kingdom decks you randomly choose from is once you explore the expansions you’re going to face some storage issues.

Everyone loves levelling up in games, and Dominion is basically nothing but levelling up. You spend 3 Copper to buy a Silver, use that Silver to buy a Mine, then use that Mine to turn your Silver into a Gold. That is just one out of countless examples of the Dominion “level up” deck-building gameplay. The only downside to Dominion*, and some may consider it a major one, is that there isn’t a lot of player interaction in some games. Depending on the randomly generated supply, there could be no “attack” cards, which means players do their own thing, and try to reach victory first. There’s still strategy involved in these games, but for the most part it could feel like you’re playing solitaire, only with other people.*

Dominion was my gateway drug into the recent resurgence of tabletop gaming, and is played in rotation as much as the day it first came out. It’s easy to learn, easy to play, and has yet to grow stale.

Expansions: Where to begin… First of all, there’s Dominion: Intrigue (500 cards). This is a standalone game instead of/as well as an expansion. So if you wanted to start with Intrigue instead of the base game reviewed above, you could.

Prosperity (300 cards) is an expansion I would recommend, as it introduces the Plantinum (treasure) and the Colony (victory) cards that can be used with the base game or any expansion.

Cornucopia (150 cards) is a good example of a small expansion.

That’s just four expansions (and 1100 new cards). There’s also Seaside (300 cards), Hinterlands (300 cards), Dark Ages (500 cards), and Guilds (150 cards, set to be released in Spring 2013). Each expansion does a nice job of introducing a new mechanic. Seaside, for example, introduces orange “duration” cards with effects that last into the player’s next turn. And while I badmouthed Alchemy above, there’s still some fun cards within, so I’m pretty sure you can’t go wrong with whatever expansion you decide to explore.