Thanks to the Double Fine explosion, more and more people are starting to take notice of Kickstarter projects. While the site certainly seems to be a go-to method for funding independant video games, it’s turning out to be a great resource for funding board and card games as well. 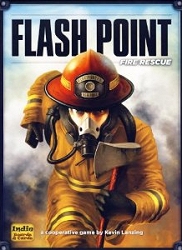 Successfully funded in August last year, Flash Point: Fire Rescue is a cooperative game for 2 to 6 players who take the role of firefighters attempting to save people (and pets) from a burning building. The fire spreads after every turn, so it’s up to players to work together, coordinating between fighting fires and saving lives. Pun a little bit intended, it’s a blast to play.

The gameboard is the floorplan of a single-story house on a 6 by 8 grid of squares with doors and walls defining the different rooms. The artwork is simple, but not boring, and it’s pretty easy to understand what’s going on at all times during the game. The 6 by 8 grid is important, because events in Flash Point are determined by rolling a red six-sided die, and a black eight-sided die. For example, during the game’s set up, you need to determine the source of three explosions before you enter the building. Roll a 2 (red) and a 7 (black), and there’s the spot of your first explosion. 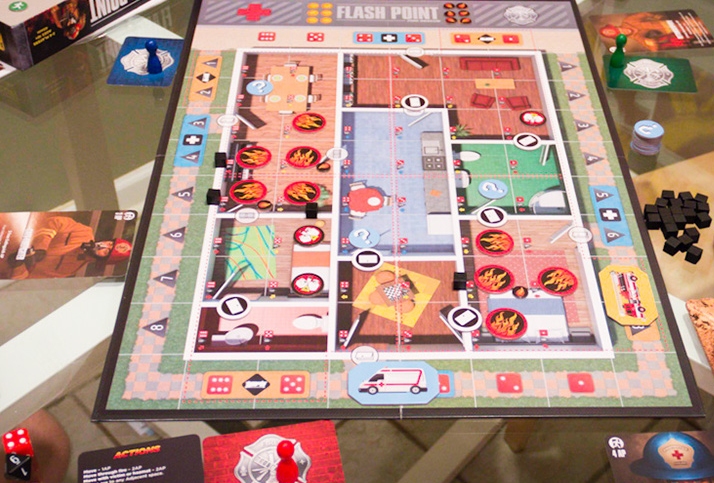 At all times during the game there will be three Person of Interest markers, or POIs, on the board. Rescuing 7 POIs is the goal for victory, and on the flip side if 4 POIs die by fire the game is over. POI markers are a question mark until you reach their spot to flip over the marker, and some are false alarms; so you could conceivably fight your way through a fire only to flip a POI marker and find out it’s nothing. If a POI is removed from the board for whatever reason, you roll the dice at the end of the turn to determine where the new POI(s) will be located.

Each player has 4 Action Points (AP) per turn, and can use those points to do anything from moving, carrying people, fighting fires, chopping holes in walls, and a bit more. Reference cards showing all the actions you can perform (and what they cost) are supplied, but after a few turns it’s pretty easy to remember what all you can do as a firefighter with 4 AP. One nice rule is if you don’t use all 4 AP on your turn, you can save up to four extra AP tokens for future turns. 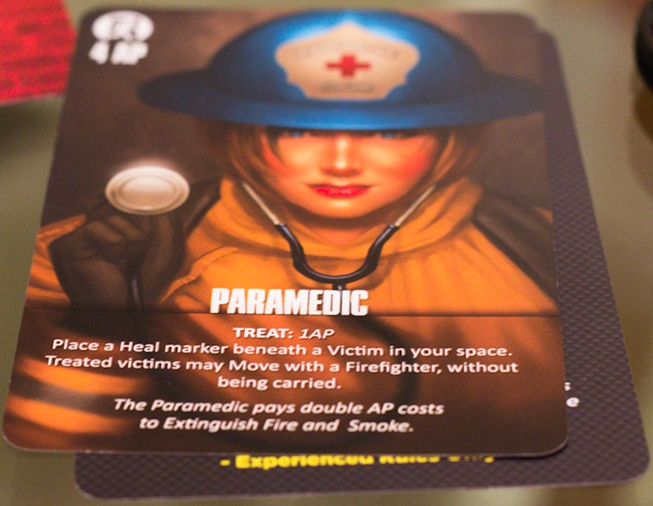 There’s also eight different specialist cards that modify your playstyle and how you spend those APs on your turn. For example, the CAVS Firefighter only gets 3 AP per turn, but gets an extra 3 points just for extiguishing fires. Another nice rule is you aren’t stuck with your role for the whole game. If you make your way outside to the fire truck, you can spend 2 AP to switch your role at any time. The roles themselves add a nice layer of strategy, but the ability to switch roles adds even more to the planning and strategy of making it through the game victoriously.

Speaking of the fire truck, each side of the house has parking spots outside for a fire truck and an ambulance. Once a POI has been carried outside the house, the ambulance needs to drive by to pick them up and carry them to safety. Fire can explode to spaces outside the house, so no one is truly safe until the ambulance picks them up. Along with being where you go to switch roles, the fire truck also carries the powerful deck gun. For 4 AP you can shoot a blast of water at a space in one of the house’s four quadrants in the hopes of extinguishing multiple fires at once. These vehicles can be driven around to the next parking spot for 2 AP (the fire truck needs a player to drive, whereas the ambulance can be controlled from anywhere), so not only do they serve important functions in saving people and putting out fires, but they’re a good method of quickly getting from one side of the house to another. When a fire gets out of control on the other side of the house these vehicles can be your best friend. 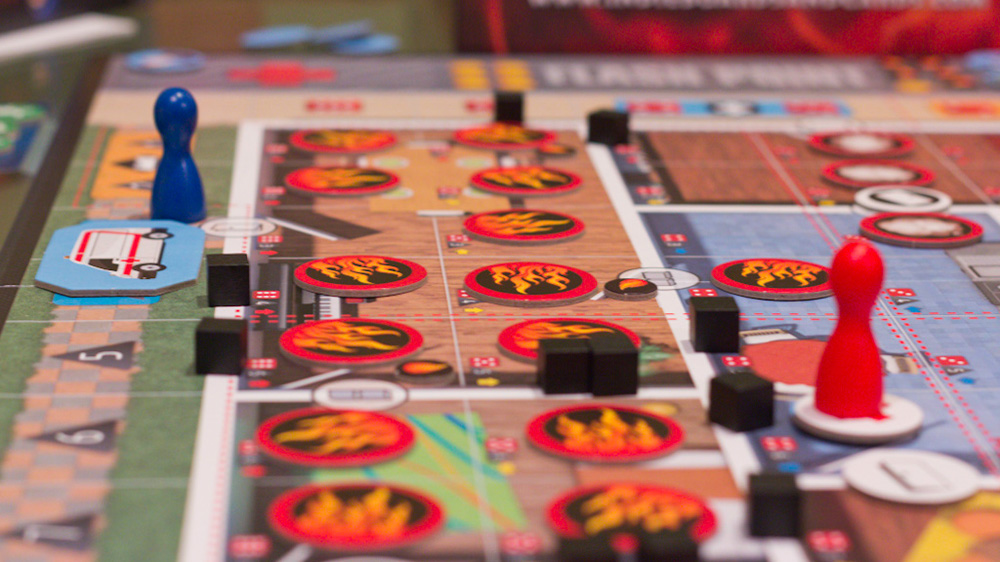 And boy can that fire get out of control. Each turn, after spending your 4 AP, you roll the dice to advance the fire. If you roll a spot that has nothing, you place a smoke token on the board. If you roll a spot that already has smoke, you flip the smoke to fire. If you roll a spot that already has fire, you create an explosion. Explosions shoot fire in all four directions until the fire hits an empty spot or a barrier such as a wall or a closed door (and say goodbye to that door). If the explosion slams into a wall, you place a black damage cube there. Once a wall has two damage cubes on it, it becomes a hole. Holes in walls can help firefighters travel quickly from one room to the next without using a door (hence the ability to spend AP on chopping), but it can also help the fire travel quickly from one room to another. Good or bad, there are only 24 black damage cubes to place during a game–if all 24 cubes are used, the house collapses and everyone loses.

During the game’s set-up phase, hazmat container tokens are placed in the house which can be carried outside (or removed instantly if someone is playing as the Hazmat Technician), and it’s a good idea to do so because if fire hits one of those containers it creates another explosion that shoots fire in every direction. There’s also little “hotspot” markers on some spaces of the board. Should you roll to advance fire and roll one of these hotspot locations, you have to resolve that fire roll, then roll again to advance the fire yet another time (and another time if that location has a hotspot marker). New hotspot markers are added to the board at the end of chained hotspot rolls, or via hazmat container explosions. 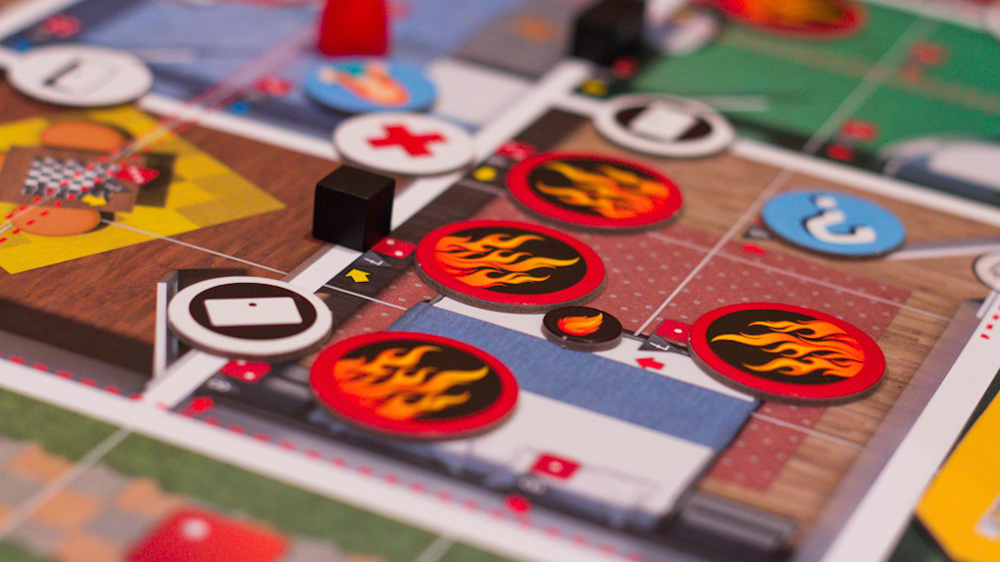 On top of all that, any smoke adjacent to fire at the end of a turn becomes fire–so what was once a semi-safe room filled with smoke could instantly become an out of control fire. You can begin to imagine how quickly fire can spread and turn the board into chaos with a few unlucky rolls, and if there was one complaint about Flash Point, it would be just that: the dependance on luck and the roll of the die. Some games could seem like a cake walk thanks to rolling fire locations that only add smoke, or placing POIs right next to your firefighter to be easily carried out; whereas other games could be over before you know it thanks to explosion after explosion after explosion being rolled. I’ve yet to play a game where we felt like we never stood a chance, and the unpredictability of fire certainly ties in to the roll of the dice, so this mechanic never bothered me.

The dice rolling and unpredictability of the fire also works well in adding to Flash Point’s strongest area, which is its theme. I’ve seen players in other co-op games have their turns played by other players–whether it’s just someone new learning the rules, or an alpha personality wanting the game to go a certain way, it can be annoying sitting there and having someone else say what to do and how to play. This doesn’t happen nearly as much in Flash Point thanks to the firefighter theme. If you see a pet POI sitting in a room slowly filling with fire, you don’t need to be told by anyone that rescuing that pet is a priority. Your natural instincts help you decide what actions to take, and that’s thanks to the game’s theme. 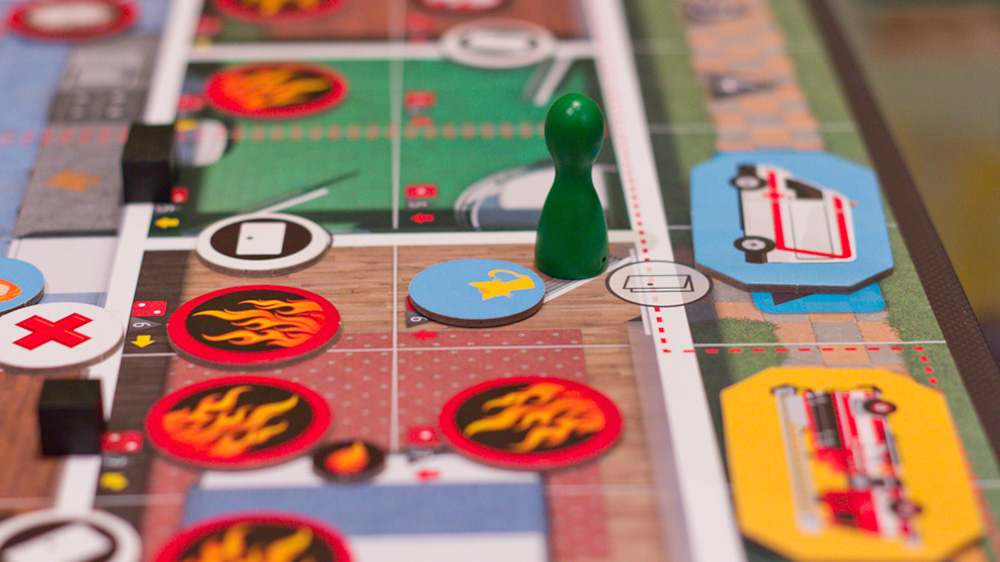 I’ve played the game many times with 2 to 5 players, and each game has been a great time. When there’s one damage cube remaining, and only 6 POIs rescued, each roll of the dice becomes a real nail-biter. It’s a great accomplishment to the game and its mechanics where those tense moments occur throughout each game. When smoke appears next to a hazmat container or POI you really get the sense of the players rolling up their sleeves to get the job done. When you lose, you’ll discuss strategy and what might have worked better, then play again to give that a shot. Thanks to the different classes and randomness of the dice, no two games feel the same. Adding to the replayability, you can flip the board over to play through a different (slightly more difficult) floorplan.

Games last 30 to 60 minutes, and there’s little to no downtime between turns which keeps the game moving at a nice pace. The rules offer a basic game variant as an introduction to the game which leave out the different classes and focuses mostly on how to spend AP along with how the fire advances, but experienced gamers will have no problem starting off with the advanced rules. If you’re looking for a fun, new co-op game, you won’t be disappointed with Flash Point: Fire Rescue.

Role cards have fantastic artwork, tokens are sturdy and easy to read, board isn’t cluttered and the colors are nice. Player pieces (generic) and vehicles (2D cardboard cutouts) could have been more in tune with the game’s theme, but that’s a minor gripe.

I’m not going to pretend to know the sacrifices and bravery actual firefighters go through when rushing into a house to combat a fire, but Flash Point does a fantastic job making it easy to imagine those moments.

Rules are easy to follow with very minimal confusion. The game is easy to teach, and also easy to learn after a couple of turns. Some specialist cards require extra effort keeping track of specialized AP, but nothing major.

Even though the dice adds a luck factor some may not enjoy, there’s still a nice balance thanks to the strategic cooperative nature of the game. Advancing the fire and resolving explosions works great and really makes it feel like you’re playing Backdraft: The Game.

I’ve yet to play the game with someone who didn’t enjoy it right off the bat. Games never feel like they drag out, and win or lose a good time will be had by all. The luck (or lack thereof) of the dice has a chance of making a game too unforgiving or too easy, but in my experience that’s a rare occurence.

If you dig co-op games but think Pandemic can be too cruel whereas Forbidden Island can be too simple, Flash Point: Fire Rescue might be the perfect happy medium for you. It’s my favorite co-op game out of the three, and that’s saying something, because those other two games are pretty dang good.

Expansions: Kickstarter backers got a second board/expansion called Urban Structures that also came with a Specialist card that dealt with fixing damaged walls and removing hotspots from the board. This expansion is basically out of print, but the word on the street is in mid-June a 2nd expansion will be asking for funding on Kickstarter, and one of the backing options will be getting the new expansion along with Urban Structures in one package.