This week’s Game Developer Conference coverage by a host of video game websites lead me to a quirky roundtable on 1up about “indie games,” a discussion that was supposed to lend insight into the recent revolution in small-scale games. While it had high hopes, it eventually devolved into a bunch of 20-ish nerds kind of laughing and claiming that they make games because “they wanted to,” and they “enjoy fucking with the player.” Well, regardless of how they feel about what they make, independent developers are, in fact, creating interesting games, which are being released right and left across a variety of different platforms. In Nintendo’s case (until we get DSi-ware), we have Wii-ware, which has, surprisingly, been much more than just a novelty. We’ve been blessed with the good, the bad, and the what-the-fuck, and the games’ modestly low prices mean that it’s not a huge deal if you accidentally buy Boingz.

So, last week I spent six dollars to purchase Bit.Trip Beat, a game created by Gaijin and Aksys Games. The descriptions for the game are lovingly vague, and the trailer piqued my interest, because I do so love myself some chiptunes. Well, when I sat down with the game, I discovered something a lot more nefarious than the trailer had me believe. Beat the shit out of the jump for more.

So, what the hell is Bit.Trip Beat? It’s a paddle game. You are a paddle. You must deflect the little pixels that stream from the right side of the screen. That’s kind of it. However, the designers synced up the pixels to hit objects like your paddle or the wall and make a certain blip/bloop noise, so deflecting the pixels causes you to progress the fun music. It’s a rhythm-paddle game. It’s technopong. Because it’s pong, and because indie game developers like to fuck with the player, you control the game with the Wii remote by holding it like an NES controller and then twisting it forward and back to move up and down. The game’s beat pulses through the controller, rumbling a bit, which actually serves to jiggle your paddle up and down enough to be annoying. I turned off rumble when I got serious about the game, but maybe that’s a cop-out? You can press buttons on the remote and make more little beeps and such, but if you do this, you will fuck up, since apparently our puny monkey brains can’t handle pong and dj-ing at the same time.

Across three levels (yeah, that’s it, although each level is a good ten/fifteen minutes), then, you twist the Wii remote, causing the paddle to dance up and down on the screen to deflect shots in rhythm with the music. The level designers did an excellent job varying the ways in which you can produce the blips and bleeps, and there are a bunch of different colored pixels that you interact with, all acting in bizarre, and sometimes quite annoying ways. Some pixels just move across the screen, some stop, change direction, and then come at your paddle, some bounce off the walls in little parabaloids. When things get a little hairy in the later levels, it’s quite hard to twist your brain into predicting just where the bouncing, streaming pixels will end up. There was one portion of the second level that featured quick, bouncing pixels where, in my attempt to just hit something, I managed to miss every single one of the fuckers. The designers did a great job of knowing the ways in which the typical video game nerd’s brain works.

This game is indeed, a gift to classic, throwback gamers. It’s Atari reimagined. Your reward for deflecting enough pixels is a shift to mega mode, where the music is a little more fleshed out, and the deflections a tad shinier. Miss enough and you’re dumped down to nether mode, and I do not want to ruin this at all. Seriously, play the game, and tell me you didn’t smile (through the pain) when you first encounter nether mode. And you will. This game can be brutal. It has multi-play (up to four players), which is very much the same as one-player mode, but with multiple, slightly shorter paddles, although this can make the game slightly more confusing, and it tends to ruin some of the flow of things. The game was built like DDR is built – each part of the level, each grouping of pixels feeds into another grouping in a natural, elegant way. With multiple players, you have up to four paddles mucking about, hitting whatever they can, and the flow is interrupted a bit. That’s kind of all there is to the game. There’s a “storyline” about a kind of space-ninja who shoots rainbows out of his ass, but whatever. The backgrounds in the levels are your standard blocky, chunky futuristic CGI shit, and sometimes, especially in mega mode, it can be quite distracting. In the first level there’s a slow moving comet in the background who can suck shit. This doesn’t ruin the game, but it’s just a little annoying when you’re trying to get into the zone. The controls are surprisingly tight, and I don’t think I would have preferred to play this with a joystick, actually. It’s a great game, and while it’s quite short and very unforgiving, its’ really fun, and you can play with friends. This is exactly what Wii Ware should be. 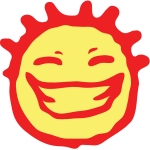